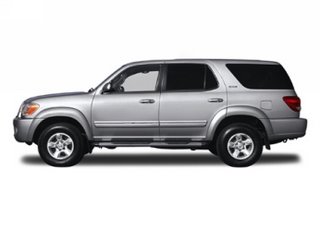 Why is there a picture of an SUV on a motorcycle blog? I'm glad you asked. Hang tight with me a minute and I'll enlighten you.

I'm still working on part 2 of Hazards R Us. For some reason I just can't make it flow. It would have been better if part 2 could have followed right after part 1. Ok, it ain't a perfect world. Besides, something fun happened to me on yesterday's commute to the office and I thought it would be cool to share it.

Yesterday brought the advent of a happening that I had never done on a motorcycle before. I talked on the cell phone while riding the bike. Quit making those noises of shame in my direction! It was for a good cause.

It wasn't exactly a chase. That implies the act of catching the quarry at the end. In this case, the quarry was a Toyota like the one above. That's why the picture is here. The Toyota SUV and it's driver were the centerpiece of this post. A State Trooper on a bike and I were players, too, just not the lead part. Since I no longer have power of arrest I had to content myself with being like a hound. I treed the critter and waited for the man with the gun to dispatch it.

Just South of Salem, Oregon's capitol, I picked up the target. Except he wasn't a target quite yet. The SUV was towing a single axle enclosed utility trailer. There were no plates on either the SUV or trailer. An Oriental man was driving with a female passenger of the same race in the vehicle with him. They looked to be in their 40's. I really didn't pay too much attention as I passed the rig. I did notice that the driver seemed to like hugging one side of the lane and then the other.

Somewhere about nine miles later the driver catches up to me. By now he's going at a pretty good clip. I'm doing an indicated 65 mph in a 60 mph zone. I figure the driver had been doing about 75. Sophie and I are in the middle of three lanes. The SUV is in the hammer lane to my left. Traffic forces him to slow so now he's beside me. I see the rig drift towards me then slowly veer back to the left. Prudence dictates I fall behind a little and keep an eye on him. Ok, I'm actually keeping both eyes on the wandering SUV. It's clear that the driver is having a hard time keeping a steady speed and lane position. Not severe, yet, but worth watching.

Five more miles and I decide it's time to report the driver. Knowing it will be 10 more miles before the driver can exit the freeway, I pull off to the shoulder and call State Police dispatch on my new thin Motorola Razor cell phone. After a description of the vehicle, the behaviour, and so on, the man at dispatch thanks me for the input and hangs up on me. I zoom up to find the SUV again; aking a discreet rearward position.

I figure that sooner or later a police cruiser will appear. 12 miles later and it still hasn't happened. The State Police are stretched REAL thin here. I'm not intending this to be an insult to these fine officers. At the same time, Mr. Toyota driver is getting worse and we're nearing the more populated area with correspondingly heavier traffic. Mr. Toyota has been as slow as 50 mph and as fast as 80. Sometimes he straddles the white line, sometimes he just moves back and forth. I've watched twice as his movements have made vehicles beside him suddenly swerve out of the way. It's time for me to do something more.

The problem is that there are more areas for the driver to leave the freeway. We're getting closer to Portland. Morning traffic is getting intense. Mr. Toyota is getting worse. As it happens, I've been wearing a modular flip-up helmet for a while. I flip up the chinbar. You have to be really careful doing this at speed, you know. If the wind catches the raised part it can break your neck. Fortunately, Sophie's fairing gives me a still pocket. Ducking down, I pull the phone out of my pocket with my left hand. I have an idea. Since it's summer my gloves are relatively thin. The phone buttons are relatively large. I hit 911 and jam the earpiece of the phone up beside my face. The phone is thin enough to fit and the helmet padding is heavy enough to hold it in place. I have to admit that I can't take total credit for the idea. I had seen the Director of our motorcycle safety program do the same thing while riding a training bike around a parking lot!

Dispatch can hear me and I can hear them. I explain the deteriorating situation and the urgency that comes with it. It's the same dispatcher and this time he stays with me. The closest officer is in Tualatin, 11 miles North. I count off mileposts and off-ramps. I report behaviour. The dispatcher tells me that if the SUV driver increases speed to 80, again, not to do the same. Just let him go. Uh, right. I assure the officer I will not be unsafe or break the law. All the while following at 80 mph. I AM staying safe, though, so I didn't totally lie.

Finally we get near where the bike can intercept. The bad news is that the SUV has turned off onto another freeway. It's not the direction I intended to go, but I assure dispatch I will stay with the driver. Hey, this is too much fun to quit now. Now it gets funny. The dispatcher asks me what color vehicle I'm driving. I explain that it's a maroon Honda. Honda motorcycle. I swear I hear the dispatcher's brain fry for a second. "How are you calling?!". I tell him to trust me, it's working and I'm capable of doing this.

As we pass underneath an overpass I see the police bike go across from left to right. Then I see the bike coming down the ramp and onto the freeway behind me. I have to say that it's cool to see a police bike speeding up behind you and know you're not the target. The male officer pulled up beside me. It was one of those that were at the training I had helped with and told you about in an earlier post. There's not that many State Police motors. He had already observed the SUV on his own. The dispatcher told me I didn't need to stop as the officer had Probable Cause. Like I wasn't going to stop anyway?

It took three miles for the SUV to notice the police bike lights and finally pull over. I have been asked not to say much about it as an arrest was made. Let's just say that the officer found some very interesting stuff in the SUV and trailer. I stayed with the motor officer until a County Sheriff's deputy came to assist and transport. Both occupants went in the cruiser. One under arrest, and one for questioning.

I decided not hang around as the motor officer had the unenviable task of waiting around for the tow truck. I could ride on and did so after being thanked again for my help. Although I did have to put up with some crap for being an instructor and riding while talking on the cell phone. What can I say?

Another good deed done by an Intrepid Commuter. You just never know what kind of adventures you will have commuting on a bike!

Miles and smiles,
Dan
Posted by irondad at 5:34 PM

I'm still trying to wrap my head around the whole cell-phone thing.

That sounds like fun, and YOU sound like you want to go back to being a cop.

But then, I suppose you wouldn't be able to keep your blog, right?

Are there any active motor officers keeping a blog? Or is that strictly prohibited everywhere? Hmmmm... time to do some research.

gary,
I don't mean to imply that riding and talking on the cell phone should be ok. I don't even like doing that in a car. I keep the phone in the pocket of the 'stich just in case. I have this vision of having an accident and ending up far away from the bike. I can't get back to the bike for some reason. At least I can summon help since the cell is in my jacket.

In this case it seemed prudent. Even if Mr. Toyota hadn't actually hit anybody, you know how panicky and stupid a lot of cagers are. Somebody would have over-reacted and I figured bad things would happen.

There's a lot I miss about being a cop. My brother is a reserve and every time I talk to him I realize there's a lot I wouldn't like these days, too. Like everything else, time makes stuff more complicated and less human friendly.

Interesting note about the blog issue. Like you, time to research!

I have done something similar but cage to cage... Good work.

My brother Bill is in the LAPD and keeps a blog which isn't anonymous. You can find him in my blogroll under "Brothers".

Dan, good work. I've tried doing the phone slipped into the helmet thing, but PDA sized phones don't like that for some reason :)

Hey Gary nothing against what you said Calling Asian Oriental is just like calling Black the N word just a kind reminder. I'm sure you don't mean anything believe me calling someone Oriental would not yield you a great respect from that person he/she may not show it but you definitely will hit a nerve. Just thought I let you know .. Have a great day

dick,
we need to help when we can. good job to you, too.

Snark,
i've bookmarked your brother's blog. I will peruse it later. thanks for the tip. I've seen those PDA phones. it looks like someone holding a waffle to their ear!

art,
thanks for the note. I do the best I can but I can't keep up with it all. Tell me what would have been "pc" and I'll add it to my long list. In this case, being a drug runner, the guy wouldn't have warmed up to me no matter what I called him!

I don't know about the States but here describing someone as oriental is the same as describing someone as caucasian; it's merely a description. Surely the "N" word is so offensive due to its origins. Whereas so far as I know there is no such history attached to the term "oriental". My ex girlfriend of eight years was half chinese and she and her family never took offence to that particular term.

You are right with that kind of person you can pretty much call him anything you want.

That's nice to hear that your ex-girlfriend family does not mind being called Oriental but try using that word to every asian people that you meet , Korean, Japanese, Filipino, Vietnamese, Cambodian, Laosian, Thai and let me know if they don't take offense of the word. Calling someone Oriental is not the same thing as calling White people caucasian it like calling White people Hawley or White boy/Girl...

Sorry Dan I called you Gary my apology...

Art,
It's ok. I'm not totally insulted to be called Gary!