Like any addiction it needs to be fueled. Literally and figuratively, as it turns out. The more I ride for work the more I find ways to do it more. Notice the clever use of more, more, more?

The rainy season's coming all too soon. I'll still ride whenever possible but it becomes a little harder to ride for work in the rain. At least not the short end user calls. Longer trips are fine. Customers don't always appreciate wet gear dripping on their lobby floors. Education is in order, don't you think? One way or another I'll find a way to ride almost every day. There's always the ride to the office. Barring that, my morning loop of 45 minutes will have to suffice. The bikes will see duty all Winter no matter what. I must ride. It's who I am, it's what I do. Bring it on.

There's a certain magic to these end-of-Summer days. The Weather Gods have blessed us with gentle times. Instead of beating on your skin, the sun warms you like the water of a hot tub. Dry, scorching, winds have changed to playful breezes. Sometimes a little too playful. Like a bouncing bear cub the wind can knock a rider around. Still, though, it brings with it a spirit of playfulness. We've only seen a few small sprinkles of rain. Enough to scrub the dust out of the air but not enough to really be noticed. I'm finding every possible opportunity to ride for work besides any commuting I'm doing. I feel like a Grizzly Bear packing on the calories to last through the long Winter. That's a figure of speech! My sweet berries and honey is riding, not actually eating. So no rude comments, please.

It was that spirit of trying to gorge myself on riding in this sweet sunshine that I set out for a meeting in Salem. Once out of town, I headed out for the back roads to the Capitol. Springhill Road's always a good choice as it follows the Willamette River. Sometimes loosely, sometimes right next to the dark green flowing waters. There's an "S" turn that runs within feet of the water and under a heavy tree canopy. On a hot day you can literally feel a temperature drop of ten or fifteen degrees. It's hard to leave that sweet spot, sometimes.

From Springhill Road we'd turn off onto the old Buena Vista Road. Once we hit Independence it would be River Road. The valley's getting too crowded to be able to really let loose on a bike but it still beats riding the freeway in a car anytime.

Five miles or so out of town the number of houses gets sparser. Urban sprawl's edged farther and farther into what used to be farm country. Housing developments are springing up everywhere. Giant monstrosities of expensive houses crowded like sardines in a tin fill the developments. Along with them come more and more cars on the road. Most head South into the city but quite a number turn North towards Salem. A lot of them work up there. Unfortunately, most know the backroads that save the big freeway loop. Eventually, though, things spread out and it's possible to get a decent cruising speed going.

There's fewer driveways but a rider still needs to keep their eyes peeled. Deer are abundant along the river country. Plenty of small animals as well the occasional stray farm animal try to lay claim to a piece of the road. Farm equipment leaves big mud piles. A rider needs to look for these animals, slippery surfaces, rocks on the road, bicyclists, and cop cars. Cop cars? 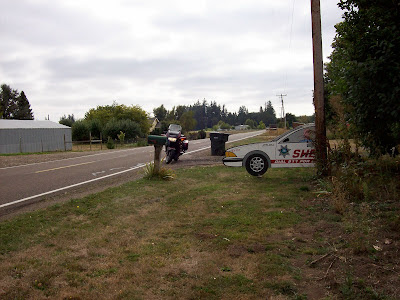 Sure enough, I see the nose of one sticking out from behind some bushes. Isn't it weird that no matter what our speed our first instinct is to glance down at the speedometer? It's like we're brain washed into a "guilty by presumption" attitude. Mind you, I often have reason to steal a glance. I ride briskly but prudently. Having just taught a track based class my tires were dripping with track rubber. It always takes a little while for the neat feeling of speed to wear off. I try to squelch it as soon as I leave the track but my right wrist can be slightly slow to get the message. 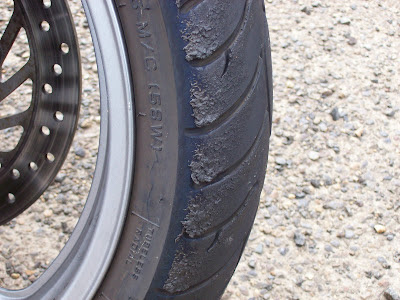 As I rode by I saw there was something really fishy about this cop car. Laughing, I pulled a tight U-turn in the road and came back. I met the Cardboard Cop. 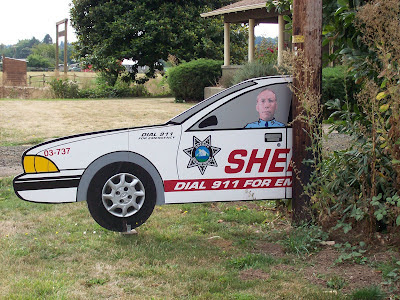 I'd heard of this fictitious officer before. Seems the homeowner is tired of people speeding along in front of his place. This elaborate ruse is an effort to get people to drive more slowly. He'd tried a couple of other types of signs that people ignored. 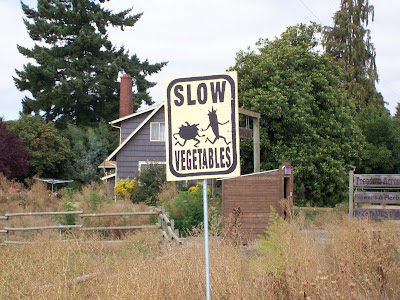 I guess it was just a little too subtle for most folks. People notice the Cardboard Cop; at least the first time. Once they realize it's no threat drivers are like crows that come to know the scarecrow's fake. Of course, it's not really made of cardboard. I just made that name up for this post. It's actually a neat creation out of plywood and vinyl. From a distance it looks quite real. Up close you see there's a thing or two missing. Like a back half, for instance! 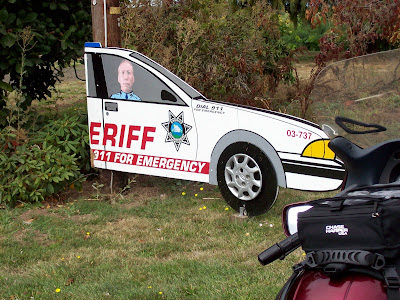 The creativity of our fellow humans can be fun and entertaining, can't it? I continued on my way with something unique to brighten my day.

The police in southern Indiana decided to park an obsolete patrol car on the highway between Vincennes and Evansville several years ago in an effort to keep highway speeds down. They even went so far as to put a mannequin in the car and dressed it in a full troopers uniform.

After a few days, they discovered that someone had stolen all of the clothing off the mannequin.

After a few more days, the lightbar was missing. They finally removed it after someone swiped the wheels and tires.

A good trick would be to put a real speed trap in that spot every once in a while. No one would slow down and the town would find itself with a windfall :-) When I was in PA the state police would do the opposite by sometimes putting an empty cruiser in a popular speed trap location. Now no one knew when it was 'real' making the empty car quite effective at calming traffic.

Allen,
I can just see pieces of police car hanging on the wall like trophies in some gang-banger headquarters! Although I wonder who got the naked mannequin?

You'd think the cops would have moved the car sooner rather than let it be disrespected like that.

Jeff,
I thought the same thing. Put out the decoy and then the real thing. I've seen that on the Delta Highway in Eugene. You don't get a good view until you get close. More than once, I've rolled off when I first saw it, only to realize it's empty!