I'm still on the road. I stopped home on the way from Astoria and made a bike change. Not to mention picking up a passenger! Katie wanted to go with me to Klamath Falls. Since I'm always glad of her company I made a detour. Elvira's not set up, yet, for passenger comfort. I've ordered a Givi rack so we can mount the trunk with the backrest. That's not here, yet. Once more, faithful Sophie is pressed into duty.

There's no Sharin' the Road post this week. Nobody's really got anything ready. I'll keep the thing going as long as folks are interested in sharing. If I run out of guests the post will retire. It's been so much fun that I hate to see it go! Remember, it doesn't have to be all first timers. If you have a Ride to Work Day story, a ride tale, etc., send me a line. If you're not too sure of your writing skills I'd be glad to help put a post together.

So much riding has given me a lot of time to ponder things. I've made a list of things to share. There's also a funny, but philosophical, story of a bitchy woman in an Accura MDX SUV. Look for these things on Monday.

I'll leave you with the obligatory photo that says, "Yes, I was really there with the bike!"

This one's for Lucky. It's taken in front of the Maritime Museum in Astoria. Yes, I rang the bell for you, Bro'! 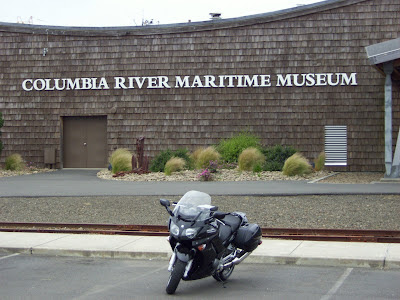 I've been trying to plot a route from Seattle to Corvallis avoiding I5. Hwy 101 seems a good candidate, but I'm wary of that long bridge crossing from WA to Astoria. Have you (or any other readers, for that matter) ridden over this bridge? Is the wind always crazy?

need anyone to watch Elvira for you while you're gone?

That bike just looks so purposeful for some reason from that angle. I will overlook the terrible tease of the script (what is behind that shingled wall?).

A picture of the bike in the world is potent medicine for anyone stuck inside. I always enjoy seeing one.

And it is an awful pretty bike.

Hope you got a chance to climb the stairs up the "Column" in Astoria. It's worth the "huffs and puffs" it takes to get to the top. That's cool you got to meet up with Lucky. There's a couple of McMenniman's in Salem too. Thompson Brew Pub and Boones Treasury. Thompsons is in an old house and Boones Treasury is in the original Oregon State Treasury building well over 100 years old (140?) and congrats on your new bike!

I'm all ears anytime someone wants to share a story about a bitchy person in an SUV...

Stacy,
I made a round trip over the bridge twice last week. My destination was Long Beach. On Tuesday afternoon there was a really gusty West wind. That made it tricky. I rode with the bike about 30 degrees off vertical. Wednesday morning, however, was a totally different ride. Things were calm. Mostly it depends upon if the weather is changing from a high to low pressure system or vise versa. As a general rule, mornings are the best time to avoid the wind.

Conchscooter,
There's maritime displays. Some of them vary with the season. If I'd turned the camera a little more to the right you'd see a huge set of window panels with a Coast Guard boat tilted up like it's going over a huge wave. I'll put a couple of more photos in the next post.

Steve W,
Thank you. I'm sort of enchanted with her, as well.

Kano,
I've huffed and puffed to the top and agree it's worth the trip. There's some renovations going on so the door was barricaded this time. It was almost a relief because I didn't have to make the decision!

Dan,
We all have that part of our personality, don't we? We love juicy stories!