I just read another great post over at Heinz and Frenchie's blog. It's about a trip to a bistro. The colors in the photos are an appealing assortment of pastel type shades. What's amazing about the thing to me is that residents can buy passes to beach chairs. Weekly, monthly, or yearly. The advantage to a scooter rider is that they don't have to haul stuff. You can read the post by clicking here.

Of course, with proper planning you can actually haul quite a bit on a motorcycle. Take a look at this, for example. 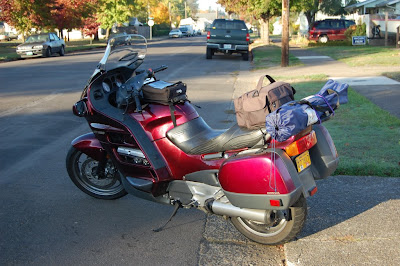 I was getting ready to go man a table for an ABATE motorcycle show in our local mall. Years of commuting have thoroughly educated me on how to pack stuff on a bike. As you can see, I had stuff in the tank bag, lunch in the saddlebags, cold beverages in the black bag ( there's a cooler inside ), and my very own chair. It's one of those folding canvas chairs wrapped in its own bag. Pretty much self contained and ready to go. As you can see, there's still plenty room to pile stuff on. Granny Clampett has nothing on me and Sophie! Has anyone seen the rest of my bungie cords? 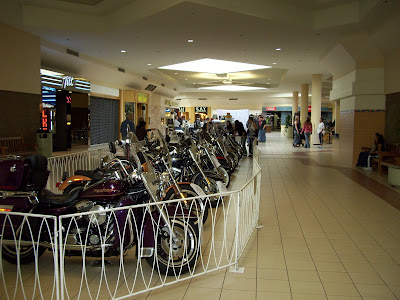 There's a number of areas where ABATE and I disagree. We've generally agreed to disagree in a friendly and respectful manner. There is one big matter we both agree wholeheartedly on. That's the matter of rider training. ABATE is a big believer in the value of training. In fact, they've helped us out financially by providing containers for bike storage at a number of sites. Just inside the doors of the containers are signs pointing to ABATE's help and support. For that kind of support I'm really grateful. 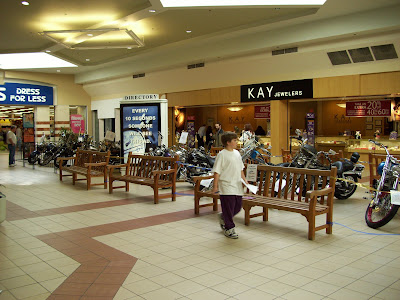 The person from ABATE who was organizing the show asked us to man a table for our training program. They provided a table for us. Since I lived close I volunteered for weekend duty. Amazingly, it was a weekend I wasn't teaching. The young man in the picture is on a sort of treasure hunt. He's got a sheet of paper in his hand. There's a list of questions that he has to look at the bikes to answer. For successful completion, the kids received a model of a cruiser. 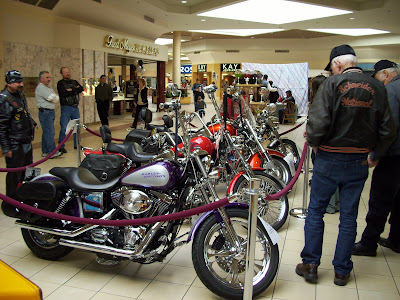 I was told by one of the guys that the group wasn't allowed into the mall last year. Seems management had an objection to the noise. Being there Friday night and helping set up, I could see his point. There was a little argument over how to get the bikes into the mall. The manager wanted the bikes pushed in. He was afraid of damaged floor tiles. Not to mention the noise of running bikes. The manager was finally convinced that his floor tiles would be better served by bikes being ridden. Some of those cruisers are pretty heavy and they would have to be pushed a long ways. There would be more of a chance of dropping bikes by pushing rather than riding.

So the bikes came in a few at a time, motors running. There's just something about those open pipes that created too great a temptation for some of the riders. A few "accidental" throttle rolls rattled windows. I do have to admit that there's a unique character to the rumbling bikes inside an enclosed space like the mall corridors! It will be interesting, however, to see if they are back next year.

Anyway, I got sidetracked. I got my lunch and a chair. Now we just have to go find a warm beach!

any of the riders who experienced "accidental throttle rolls" by any chance wearing "loud pipes save lives" patches?

this guy goes a bit overboard in terms of packing stuff on his motorcycle.....

What mall was this at? It sounds like an interesting event...

Hi Dan, Thanks for the good words about our blog. You know motorcycles have a lot more storage possibilities than scooters. Loved your reference to the Clampetts. The show looked like it had some very nice models on display. We always enjoy your posts and have learned to much reading them. Thanks again.

I never understood the logic of loud pipes. I like silent power and perhaps the sound of a loud steibel horn, but loud flowmasters on a muscle car, now that is music to the ears

I kinda have an issue with ABATE types, other than the "Loud Pipes Save Lives" and anti-helmet law stuff.

I know they express the line "Education over Legislation", and that they believe in rider training... right up until you try to get *them* to sign up for a class. Every time I've asked one of them when the last time they took a class, most of them will bluster "Well, training is good for other people- but I know how to ride!"

Maybe I should then challenge them to become instructors. I believe that's how TEAM OREGON hooked Dan, lo so many years ago. ;-)

I agree Dean. I am a firm believer in "put your money where your mouth is"