As I write this there's actually a little bit of sunshine outside. What I am I doing in here? Should be out on the bike! Oh, wait, It's Oregon. Five minutes ago it was sunny. Now there's black clouds and sprinkles. Suddenly I get this urge to turn a lamp on. A week ago the sunshine was arriving as buckets of liquid. Good ole Oregon liquid sunshine. In other words, it was raining cats and dogs as the old saying goes. I'd agreed to head to Portland and supervise an instructor workshop. Elvira and I were going to get pretty wet. After that ride, I considered changing her name to something with a more nautical ring to it. Maybe I should call her Ariel the Mermaid.

Actually, that's what I'm going to rename my wife. Not long before it was time to leave, Katie pipes up and says she wants to go along. I ask her if she knows I'm riding. Close to 70 miles one way. There's no option. The workshop is about honing riding skills. It would look pretty bad if the one directing the exercise showed up in a car. I'd be laughed out of the Corp. Turns out, that's why she wanted to go. Katie claims it's been too long since I took her out on a bike. Muttering things about insane people under my breath, I tell her to get her gear. Not that I don't want her along. It's just that, unlike me, she's got a choice. Why would anyone willingly choose to ride 140 miles in the pouring rain? Maybe I should go look in the mirror for answers. 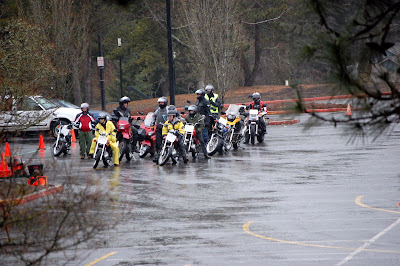 The workshop is at Portland Community College's Sylvania Center. Our workshop is on the upper range. This is a group on the lower range. They're taking what we call the Intermediate Rider Training, or IRT for short. It's for people who know how to ride but want to get legal. We work on mental strategies and accident avoidance skills. Students can use our bikes or their own. Most opt to use our training bikes. Some, though, get an extra advantage by using their own bikes. Except for beginner riders, it's better to train on the bike a person's actually be going to ride. This group had a scooter and several dual sports. Here's a closeup. You can also see how wet it is! In fact, the skies drained on us the whole time we were out there. 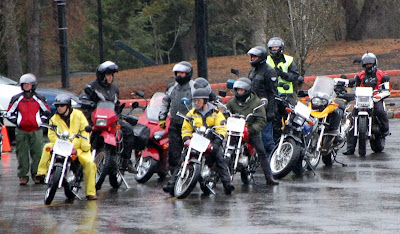 For this class and the Rider Skills Practice class, the instructors ride the demonstrations on their personal motorcycles. It's about credibility. Speaking of which, I have to tell a little story on myself. It's about getting carried away with one's own fun.

A few years ago we used to teach the MSF's Experienced Rider Course. We would set up a very large offset cone weave. It was used as an initial evaluation tool. If a rider couldn't somewhat manage this weave we would encourage them to take a more basic course. I loved this weave. The two lines of cones would be almost two thirds of the range apart. The idea was to slow before each cone, run an even arc around the cone under power, then head across the range for the next one. This would require a fairly tight turn. To do it successfully, you'd have to crank your head way around. We'd run two laps for the demonstration, being smooth and precise. Note, that's in contrast to fast and furious.

Of course, nuts like me would always like to play a little, if you get my drift. My fellow instructor had the weave set up while the students were gone to lunch. I ate my own lunch. During the summer I always have a hot lunch. I just leave my sandwich on the bike seat! Anway, I was going to ride the demo. We have to warm up, right? This was when Sophie was a couple of years old. Her and I were pretty darn comfortable with each other by then.

The range where we were teaching has a hump near where one line of cones would be. I'm not afraid to lean a bike. Not even in a parking lot. Note that I said the demo had to be smooth and precise. This was play, not a demo! So I'm out there weaving and leaning happily away. A couple of times I literally scraped the bottom of Sophie's saddlebags on the hump. In between I'd do some quick stops, swerves, and so on. My concentration is totally on my play, er, I mean, serious practice. Having stolen a glance at the dash clock I decide I should call it quits and get ready for the students to arrive.

Only to find out they'd already done so. Steve Smith, the other instructor, and all the students were lined up on the sidewalk watching me ride. Mouths were hanging open. One of the students came up to me with hand extended.

"Congratulations! If you were trying to establish credibility, you've done it!"

Steve later told me that while they were watching, somebody made the comment,

"Yes, he does," was Steve's reply. What he didn't say was that I shouldn't have been scaring the students like that!

My workshop was attended by some newer instructors who wanted to hone their own skills. One is a brand new instructor but not a new rider. He's a former Army Ranger. He finished 6th in the 2003 Iron Butt Rally. Yet, he showed up to hone his demo techniques and never said a word about anything else. There was no ego, only a desire to learn. I can't say enough about how impressed I was with this group. It was by no means a mandatory session but they braved the nasty weather in pursuit of further excellence. No wonder I'm so proud to be a part of this organization! 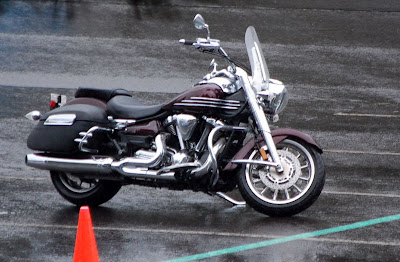 One of the instructors is riding this Star Stratoliner. No matter how you cut it, this is a big bike! It's dry weight is listed at a little over 800 pounds. The wheelbase is 67.5 inches. One of the exercises we need to ride demonstration runs for is the infamous offset cone weave. Yes, it can be done on almost any bike. It's a matter of technique.

This instructor was having a little trouble getting through it. My task was to watch and coach. When he asked me for feedback, I flashed back to Nancy and her Yamaha Vino. What could that dimunitive scooter and this behemoth cruiser have in common?

"Think about initiating the next turn sooner. As soon as your front tire reaches the cone, start back the other direction".

Bingo! The instructor already had the clutch work figured out. It just took a small adjustment in timing to get the rest down. Now he was running it flawlessly every time.

Here's some photos I took in the rain and in a hurry. We ran until almost dark. As you can see by the headlight reflections on the wet surface. 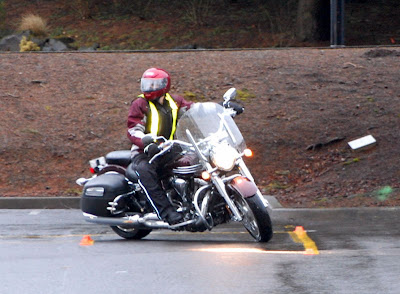 Here's the big bike in the 90 degree sharp turn. Look at the instructor's head turn. The bike is in the middle of the lane and in perfect position to make the corner. 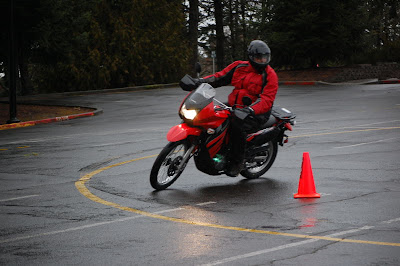 We run a barrel ride in the Rider Skills Practice, or RSP. Here's some photos of bikes around the cones. Again, notice the head turns. So critical for directional control. 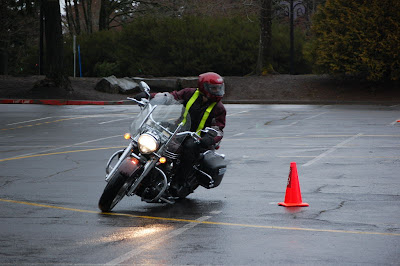 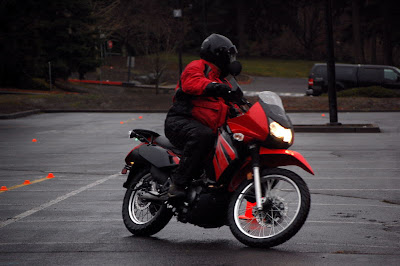 Practice over, everybody parted company for their respective rides home. Katie and I jetted home in the dark, just as wet as the ride up. These are the times, two up in the rain and dark, that I feel so comforted having ABS on a bike. Once we got home we could hardly move for all the wet gear hanging about here and there. All in all, though, a great day, rain or not.

There may be more on the cone weave coming up this week. The skills test is an interesting subject. Stay tuned.

redlegsrides said...
This comment has been removed by the author.
4:36 PM

Good post Dan....I don't mind riding in the rain, its the visibility thing that bugs me. Keeping one's visor clear can be challenge, specially if road spray is involved.

Around here the road spray dries quick and brown....it can make life interesting.

Rain and night, maybe not so eager to do that....it tends to get below freezing when we lose the sun, this time of year. : )

Awesome write up. I would love to have seen a picture of those jaws hitting the ground...

Charlie6,
I hate that in between time when it's wet, dark, and close to freezing. I often elect not to ride then. That being said, if I didn't ride in the rain I wouldn't be getting much riding at all!

Like you said, the visibility can be an issue. I hate being behind big trucks. They can't help it, but they put up a lot of spray.

Tim,
Thanks. Looking back, I wish I had a picture, too. Like a lot of other things.

he old adage "you go where you look"
applies in doing the cones. Mind have seen rider's of Harkey-Davidson's do it with ease.
Having now seen a Harley-Davidson Ultra
beside a full dress Goldwing know why.
The HD is a physically small motorcycle.
And I can't fit on it either!

Katie was riding down and back behind a
barn door, and she also was lonely.
So what did she do while you taught?
Played student?

And because of the wet, did any of the
tires on the motorcycles slide?
Enough to tip the bike?
Am assuming these cone courses are
done a very low speed; have done a
cone weave usually in 2nd gear as opposed to first gear,
far more control.

Remember, rain is liquid snow when it is
colder, sunshine when it is warmer.