Since there seems to be a lot of camera buffs on two wheels I thought I would share my new lense purchase with you all. The lense has a great portrait focal length range being a 24-70mm on my Nikon with a 1:5 correction ratio. It's pretty "fast", opening to f2.8. If that's neither fast nor far enough, there's an accessory that adds even more speed and zoom factor. 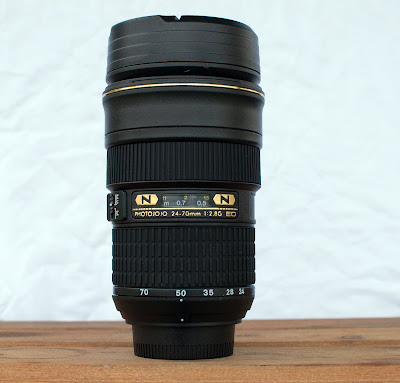 As you can see the lense does zoom. There's an extra thick cap for protecting this high end G series NIkkor lense. 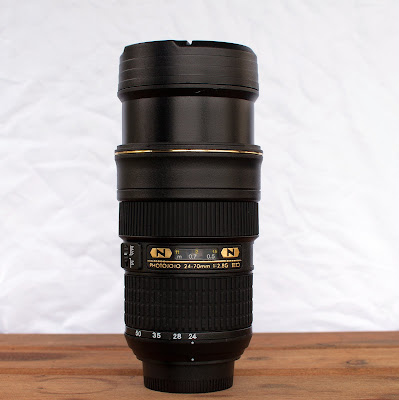 Being both the wild man and coffee hound that I am, I've discovered how to get even more from the optics. How many of you people are brave enough to pour strong Starbucks coffee on your lense for extra performance? 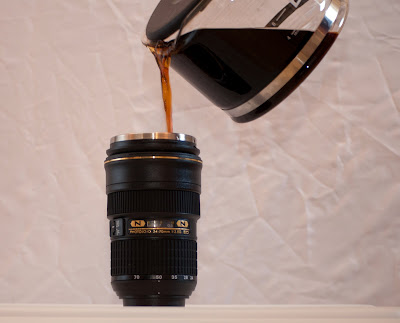 Should you, too, wish to follow in the wild footsteps of Irondad and become your own wild Ironperson without the discovery risks I've taken ( pause for a breath after reading that sentence ) simply click on the link below. Operators are standing by. I think. Unless they're on coffee break.

just don't get them mixed up. It started out so innocent. I really thought you purchased one of those new Nano lenses.;

I had just ordered a couple of those this morning! I thought they looked pretty cool...

I bought the Canon one months ago! Love the quality and they really do fool people! Have fun faking others out! :)

My first thought: if Bob sees that he'll get a heart attack. Nice one!
I love your current header pic. Very sweet.

Dan, me boy, I looked at the piece of glass and realized, "I know that lens, it contains far too much coffee to be consumed without enducing a caffeine attack.

Then again was wonering if you prefer the Canon point and shoot or the Nikon DSLR?

Both are great, one is simply more "portable, "or should we say potable, in this case?

You are seriously bad - lol!

...and after reading the comments, there seems to be a whole gaggle of jokers here!

Off to go coffee mug shopping...

btw the header pic - so cute!

I got two great gift ideas from this site. Thanks for posting it.

Next thing you know, you're going to blame your sore arm on this, too, aren't you?

I'm amazed at the detail on the things. Except for the lid, of course. The lid also doesn't have a slot to drink from, Still pretty cool, though!

What? A Canon person is commenting on a Nikon person's blog?

Let's BOTH have fun faking people out, eh?

I just want to get this straight. Do I gather by your words " nice one" that you actually wanted Bobskoot to have heart failure?

Nice. Thanks for the comment on the photo. It was one of those spur of the moment grabs.

I actually find I greatly prefer the D-SLR. I take the point and shoot only when it's not practical to lug the SLR.

Then, too, you can't put much coffee in a point and shoot lense!

Being a gaggle of jokers is what makes us enjoy each other's company, isn't it?

So what is the second gift idea?

@Irondad: Hell, no. 'Nice one' was of course meant for your idea of posting this ;-)

That's pretty neat... you really had me going.

I like your header photo too - Ryan is really growing!

I almost wish I drank coffee...

Amazing how realistic these things can be in a variety of applications. I was at a photographer friend's house and saw he had a lamp that was made to look like a 600mm Nikon ED F2.8 lens. When I commented on how real it looked he said, "It is" with a note of sadness in his voice.

Turns out his tripod leg came loose and the camera and lens tumbled into the Chesapeake Bay. The lens was magically transformed into a lamp when no one could repair the damage.

And I like your new blog layout. Those new templates are cool. I'm going to have to do some imitation...

So Dan, when are you going to go collect the Christmas tree and mount it on the back of the motorcycle and drive round the neighbourhood?

Photographs of you doing same from previous years not eligible!

MInd, some peole do the darndest things to get attenetion!