One of the great things about riding is how it helps me appreciate small things. Ok, not always. There's days when I hit the road, put my head down, and twist the throttle. Then there's days like this week. The agenda calls for a couple of hundred easy miles a day. I'm playing Motorcycle Santa again. Stops are loosely scheduled which leaves a lot of room for discovery. Here's some small thoughts from today's run.

First stop is in the Northwest Portland industrial area. For those local, it's way out west on Columbia Blvd. Mapquest says it's 73.86 miles from home. Nice distance for an early morning jaunt in the cold. On the way up I pass by Mike's tram and have a great view of Mt. Hood. The day is cold and cloudy, but one side of the mountain is lit by some distant sunshine. It's photo worthy but I'll be danged if I'm going to stop in the curves and get my ass run over for a picture. You'll just have to look at Mike's post to see the mountain. 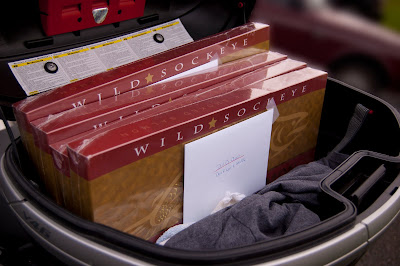 Each year we hand out cards and a box of smoked salmon to our distributors. Four boxes will fit in the Givi. There's enough distributors for four day's worth of riding. Sweet!

It's more than a small blessing, but picture going to bed at night and thinking about work the next day. Sleep can sometimes be fleeting from stress. Not so this week. Sleep is still fleeting but it's due to enthusiasm about the coming work day. I've been greatly blessed to be able to ride for work a lot. This week has been especially great.

What's really interesting is the reactions from the people that work at the distributors' offices. Guys want to talk bikes. Some of the women look at me with extra interest. The same women, who if they saw me on the street sans riding gear, wouldn't look twice. Worse yet, they'd look away!

We have this one distributor where the owner has pictures of himself all over his office walls. Most are of him on bikes at different track corners. This guy is my age but much crazier. Hard to imagine, I know. He crashes more than he finishes a race. Each visit is filled with stories of his daring exploits, track and street. Last time he told me how he ran his KTM off the road into a muddy ditch and had to be towed out. He knows I ride and am an instructor. Not sure how he feels he's going to impress me with his crash stories.

Today I showed up on Elvira. 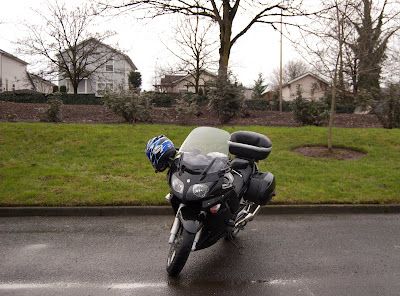 This is in their parking lot with Columbia Blvd behind the bike. You can see the pavement's still wet. It was 33 degrees (f) when I left home. By this time it was all of 37 degrees. By the way, if you look closely you'll see I've done something that I tell new riders to never do. There might be a prize for the first correct answer.

Anyway, this guy comes out to look at Elvira. He's still telling stories. I see him look at the tires, both of which are scuffed all the way out on both sides. He looks at the ground off peg feelers. Then the sidestand all scraped up. He bends down and looks at the scraped center stand. He gets quieter and quieter. Kind of like somebody bragging about doing something finding themselves next to somebody who's actually done it. I don't say much. Elvira's doing the talking for us. I know it shows my big ego, but it was pretty cool!

My next stop is on the road out of Portland towards St. Helens. It's still darn cold and my route has taken me along the river. Which is a cold and foggy trip through the shipping ports of Portland. I have to wait a bit to see the owner.

There's a shop dog that hangs out here. He's a huge Newfoundland with a friendly personality. Like a St. Bernard, but black. I'm standing in the lobby in my 'Stich. My hands are freezing, despite my heavy gloves. The dog wants me to pet him. There is no way to describe how wonderful it is to run cold hands through that long black fur! The dog loves the attention and I luxuriate in his warmth! When else would you discover such a blessing except during a cold motorcycle ride?

Back at the bike, I grab my cell phone from the tank bag. There's a missed call from the boss. I return the call. At the end of the conversation I tell him that I'm on the bike today. Telling your boss that you will be unavailable for a while because you're riding? Priceless!

This post is getting long so I'll split it up. Stay tuned for Part 2 and how Irondad gets trapped in a whirlpool while looking for a restroom.

Hang your helmet on the handlebars.

Your helmet is on the handlebars and your bike is on the side stand facing downhill, (and probably in neutral).

... and I tell the story of running off the road into a muddy field to remind myself of how stupid I was, how I felt that day, several days afterwards and not to do it again.

You are facing downhill with transmission not in REVERSE. and you are not fully backed up into your space.

Seriously, did you think we wouldn't spot that - lol!

Didn't stop to shoot Mt Hood in the morning light, and you call yourself a photographer! j/k, glad you opted for safe! :)

I rode today, and saw Hood from Salem. Not a photo worthy scene, but spotted from the seat of the bike - priceless!

Merry Christmas to you and yours!

Nice ride report on a cold day in Portland! Thank you for the mention. I feel the same way you do... blessed that I can ride and the boss knows about it.

Anytime you get to ride while on the clock is +5. As many hours a week I worked while doing the consultant gig, I searched for opportunities to ride.

I will always cherish the look on my bosses faces when they learned I was riding from Atlanta to Tampa as opposed to flying. And, I'd do it again in a hearbeat. It was one of the most enjoyable rides I ever took while working.

And there is nothing like pulling up to a CPA firm's office on a motorcycle and looking at their faces. "Out tech geek rides a Harley!?!"

Helmet on mirror is easily knocked to the ground. Bike facing down a slight hill could roll off the sidestand.

I know exactly where you went. I'm not a fan of US 30, though I imagine it would be a more pleasant trip on one of Elvira's cousins than on a scooter...

Merry Christmas, and Happy New Year to you and yours!

Merry Christmas and a Happy New Year.
All the best for 2011

I also don't get how people who crash are considered "good riders" in any way. They seem to think so (?) ... the ego thing again.

Sorry about the cold, lol, we're summer here, and the days are hot and and humid and lazy ;-)

peace and love to you and your family :)

Richard was the first to point out what I was referring to. As to the rest of you, what a hard bunch!

I got called on the carpet for parking facing downhill on the sidestand and everything! Not only that, but Bobskoot wanted me to find REVERSE on Elvira.

Having the helmet possibly fall off is one reason not to hang it on the mirror. The other is that the impact absorbing liner under the hard outer shell can get compressed by mirrors, sissy bars, and so on. That compression negates its ability to do its job.

Shoot me an e-mail, Richard, with shipping info. Either to the Irondad address if you still have it, or to


There may be more chances coming up to score!

So the softness sets in, comfort over form, gentleness instead of rugged. Might as well install windshield wipers too and perhaps a heated seat. Just make sure to connect correctly to the Negative Earth wire(s). Contrats on your new heated gear.

Did she also get heated gloves and a heated liner ?

Hope you and Katie have a very Happy New Year.

Interesting read, no need for me to comment on what was wrong with that pic.! All it needs is for some Joe Public to come up and pull the clutch lever.......there goes Elvira!
Lucky man to be able to ride all day at work!

Call me soft will you? Of all people, you should know better! Actually, I didn't wire the bike to use the plug for heated clothing. I wired in a cigarette lighter plug. Eventually I'll patent it as a cigar lighting device for BMW riders. Especially those who are from Penn State and keep a blog.

Is the salmon frozen or not?

Just thinking of a container of salmon sitting in an office over the Christmas and New Year's holidays un noticed..as it eitherturns into something else or becomes mleted and squishy and....