Just a few photos and comments.

Saw these in Bend Friday night. Not a pair you would normally see together. I think the common denominator was the downtown festival and beer garden around the corner. One of the bikes may be counting on the other to protect it. The question is which one? 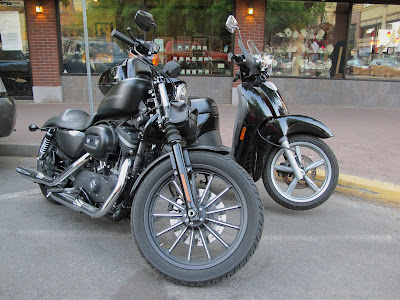 In the top right corner of the photo below you can see my patient bride waiting for me to get my photographic jollies. Thanks for all your support, my lovely princess! 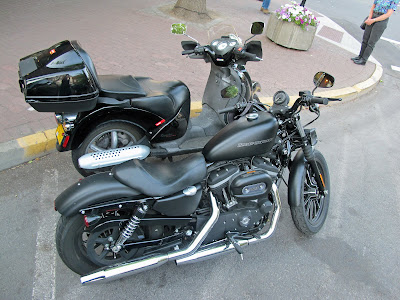 This bike was at an ART class I was teaching a while back. Made me think of you know who. Care for a little more bonding with Max? 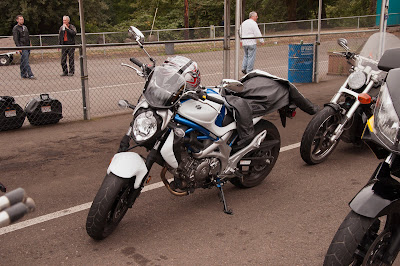 Here are some photos to titillate the guy with a foot fetish. A guy we dearly love, of course! The first photo is one of the class instructors. 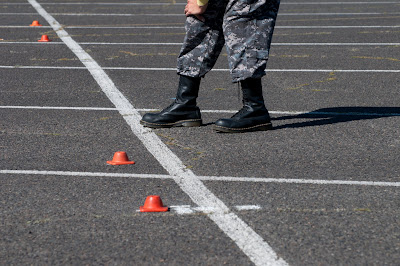 Some assorted footwear among the students. We require the ankle bone to be covered. Boots not necessarily required. 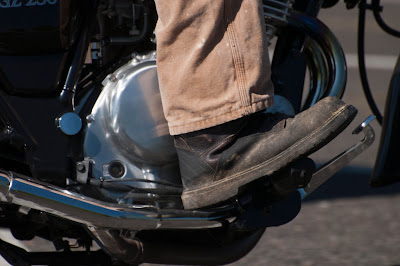 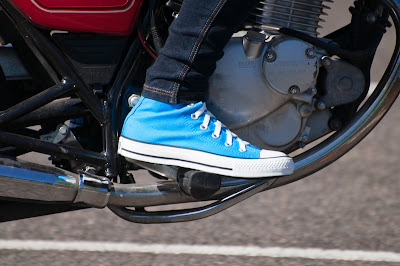 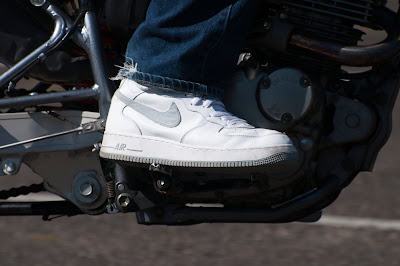 Here's what happens when a student doesn't have over the ankle footwear. They get a dose of stylish duct tape. 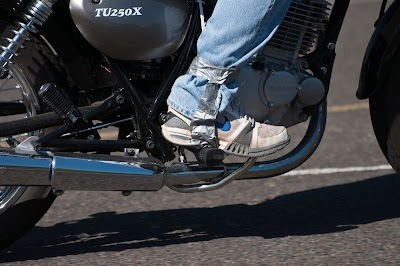 I once worked with a new instructor. A student needed taped. The new instructor assured me he knew about the stirrup and wrap technique. So I turned him loose. There was one small piece missing in the technique. The taping happened under the jeans. The young man who was getting taped was wearing no socks. It was a powerful reminder to me that one should trust, but verify!

Needless to say, the student had the proper footwear the next day. Go figure.

Ever have the urge to buy a convertible?

This one is for sale. Windshield wipers included at no extra charge. 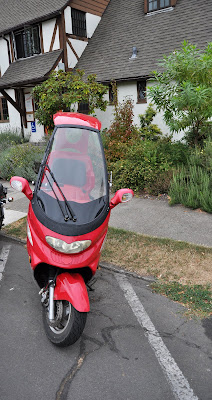 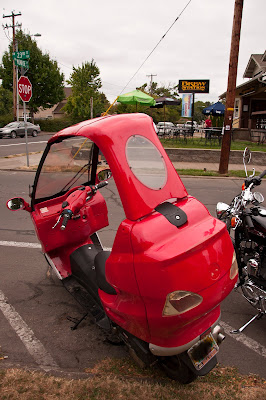 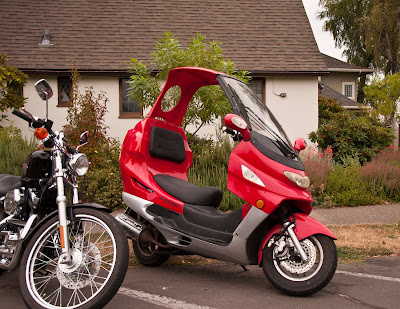 You may well be surprised how many companies make hardtop scooters. I once rode one, made by a company no longer doing business in the U.S., and found it top-heavy, lacking in structural integrity (it had fallen over a few times) and generally reluctant to change direction. My opinion on such machines: get rain gear.

tsk, tsk on photo #2 you cut off Katie's head. It's nice to be loved and wanted. Did I get the right number ?

I don't understand the convertible scooter concept. The whole idea is to be out in the elements, not protected.

thank you for thinking about me, but not a Pink Croc in sight

Why yes it was a Gladius, sporting a little fly screen too.

One day I'll take another training class, but for now I don't think I have enough total miles to qualify for the ART. Thanks for thinking of me.

When I saw the Sportster and the scooter I immediately thought of SonjaM & her fellow traveler. Nice looking bike. I've looked at a couple of those covered scooters and they seem, at best, an odditie. I've never tried riding one though. As Orin said, get rain gear if that's the reason for the roof.

The covered scooter is all the rage here in Europe. BMW even makes one. Since we're name dropping today, maybe we should order one for Riepe. I think he'd look good under the hood.

I really had a good time with this blog... Looking at hot motorcycles are my second favorite thing. That Harley is smoking hot, and bikes like this are generally not my thing.

BMW introduce a hardtopped scooter, specifically designed with a roll cage and a four-point harness to preclude a helmet. This was in 2001. The unit was known as the C1, and the damn thing wouldn't get out of its own way. It had a lot of cool innovations, some really cumbersome.

The new Beemer scooter is nothing like it... Imagine that.

You'd be amazed at what I look good under.

I could see the top heavy thing. Kind of like the Flintstones cartoon with the huge rack of ribs that tips the car over, eh? How embarrassing!

It's her own fault. Katie wasn't supposed to even be in the photo. For some reason she refused to step out of the way into the busy street, though.

As to the pink crocs: I am diligently searching for the pink croc graveyard. When I find it I'll send you the photo first.

No pressure intended. GThe bike just made me think of you. When the time is right I hope to have you as a student.

When I first saw the two together I thought of kissing cousins. I knew that Harley had purchased and then sold an Italian bike company. The scooter is an Aprilia. My mistake. Wrong brand. Still, though, two of the same color was pretty cool.

I agree with you all. If you need a roof stay in a car.

Different strokes for different folks, eh? Perhaps they buy for fashion, not function.

I think Jack would look good under the whole scooter, actually. Then he could truly say he was two tired.

Thank you for the compliment on this post. Now I almost feel bad, but not quite, for the comment I made about you to Brady.

However, it's your fault as you opened the door in your comment to Brady below. Now I am constantly looking at things and wondering how you would look under them. Pretty interesting mental pictures so far.

Thank you for the compliment on this post. Now I almost feel bad, but not quite, for the comment I made about you to Brady.

However, it's your fault as you opened the door in your comment to Brady below. Now I am constantly looking at things and wondering how you would look under them. Pretty interesting mental pictures so far.

So, what does your state require? Do you require full riding gear, even in the summer heat? Long sleeve shirts and jeans don't protect squat, either. Just curious since you brought it up.

There is a movement afoot in the SMSA to require instructors to wear full gear during riding demonstrations. The idea is for the instructors to provide the proper example for the students.

Apparently there is some sort of subliminal message being sent that says "we tell you always to have full gear but we are going to ride in the parking lot with only a long sleeved shirt and jeans so it must be okay for you, too."

We aren't going that route but we are taking steps to make sure the students realize the difference between the parking lot training and the streets as far as gear goes.