A while back I shared the three guiding principles I ride by. One of those is "Riding with Purpose".


There's a lot to it but it basically means keeping your head in the ride.  One aspect is realizing we are on a motorcycle and then adjusting our thinking according.  Something that gets a lot of riders into trouble is thinking like a car driver while riding a motorcycle.


Car drivers may not even think twice about a certain roadway condition, for example.  For a motorcyclist, though, this same thing could be a real hazard.   It's critical for us to get our thinking on the right track lest we become derailed.  In the situation I recently discovered it could happen quite literally.


Over the past few months that have seemed like years, several major arterials in Portland have been clogged by crews ripping up the streets.  I've avoided these as much as possible because I've grown tired of doing snail impressions.  The other day my dictated destination didn't leave me much choice.  To my relief the construction is done.  To my chagrin, I know now why.


In a huge city I guess light rail for mass transit is important.  To be effective said light trail needs to go where people need to be.  Well, it now goes a long ways North and South! 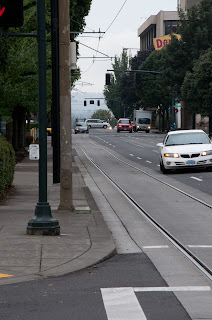 As it turns out, the light rail is pretty much the right lane on two major North-South routes.  There are three lanes of  travel so we could simply ride in one of the other two, right? The fly in the ointment is that a lot of the major destinations require a right turn.  Makes the intersection a bit tricky. 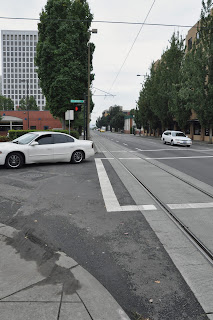 Car drivers don't have any problem with gliding over and making the right turn. As riders, however, we know we really shouldn't be doing that.  Our angle should be at least 45 degrees.  Not sure how we're supposed to do that when we have traffic REALLY close on our left that impedes moving over to get that angle.


Truth be told, with the condition of the street and tracks right now a front wheel isn't likely to get grabbed.  Eventually the pavement / blacktop will start getting big gaps.  For now, though, I see the issue as being a combination of wet steel tracks and the required braking and lean angles for turning.  I've done it successfully several times with no unsuccessful attempts.  I'm aware of the hazard and change my approach accordingly. Hope the other riders do the same.


Ride with purpose and think like a motorcyclist.  Sometimes it means we need to slow down and be cautious as much as we hate that! 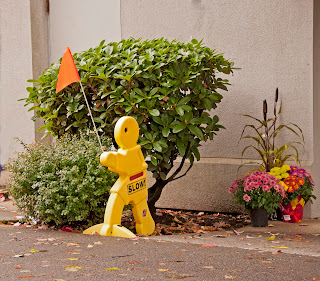 
Dan
P.S.  I'm trying Blogger's new layout.  There's a few things like paragraph spacing and stuff that I'm still working on.  The html codes seem different.  If anyone else is doing the same and cares to share wisdom I'm all ears, so to speak.
Posted by irondad at 11:58 AM

I remember looking at the light rail tracks and wondered how to make a turn across them. The best I could come up with is a swerve in the opposite direction followed by the turn trying to increase the angle. But this tends to confuse some other drivers as they wonder what you are doing. Wet tracks or on the metal access panels they sometimes put next to the track just makes things worse.

As far as Bloggers new input, I end up switching between compose and html mode often to get things the way I want. When in compose mode, there are more options available when adding pictures or links but many times the text gets put into the wrong place. One other issue is that "compose" mode doesn't work on my mobile browser.

In a town that is so expansively friendly toward bicycles, the motorcycle and scooter crowd has some really treacherous obstacles to survive.
With the intense traffic and wet tracks and grates on these streets - it seems very hard-core with a very real and immediate threat.
I think the ADV-rider crowd is missing out when they are out playing in the woods and are not taking advantage of riding wet PDX bridge grates, crosswalks stripes, manhole covers, steel plates, and rail tracks.

Dan, how can I contact you? I am in PDX and would love to get coffee with you when you are in town. Unknown = Robert.

@Unknown- "In a town that is so expansively friendly toward bicycles..." Has anyone asked the bicyclists how they like all the light rail tracks? I can't imagine it's much (if any) better for them than it is for us.

"How can I contact you"- You just did! ;-) I'm told if you stand outside a Starbucks without too many light rail tracks or construction around it, and whisper "Dan, I'll buy you a coffee" three times, he'll appear. Hasn't worked for me yet, but my nearest Starbucks is in a suspect location. Maybe I should try the one he's known to frequent. (Won't help you, it's in Lancaster Mall, Salem).

And for the posting- My problem isn't riding like I drive, it's driving like I ride! Fortunately I drive a Miata, so quite a lot of what keeps me safe on two wheels also works on four...

great post. I've had my "issues" with tracks and wet manhole covers. gets your heart pumping. :)

Perhaps the word "swerve" is a little abrupt. I'm sure you meant to gently move in the other direction, right?

Even that's really tough to do if there is traffic in the lane immediately to the left. It requires slowing much earlier to you cross the tracks at a low speed.

Portland IS hard core. I ride there a lot. It seems a lot of others avoid it.

Thanks for the coffee invite. Shoot me an e-mail to the one I set up for this blog. We'll switch to a private channel from there.

What a thing to say about somebody who thought you were a friend!

Let me put my Starbucks cup down and I'll type a reply to your comment!

Thank you for gracing the blog with your comment.

Heavy traffic and the close following distances can make the pesky things appear out of nowhere, can't they?

Bad for the nerves but good for the circulation!

Just one more reason to avoid Portland. And if the tracks don't get you, the train will. ;)

This is not only a Stateside problem, Dan. Over here in Nottingham, England, we have the start of a new tram system. The first line is up and running and the go-ahead for lines 2 & 3 has just been given. Another group of wheel users that can have problems with the rails are wheelchair users. It does not bear thinking about (no pun intended) if a wheel gets wedged in the rails with a tram coming towards them!