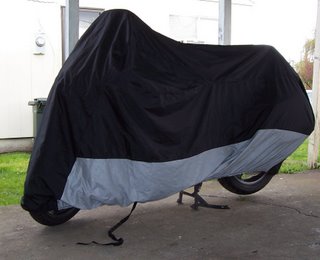 You have NOT seen this bike! If anyone asks, there is NO bike under this cover. As a matter of fact, this cover is not on a bike. It's an uumm....oh yeah, a barbeque with large wheels. Yes, that's it, a barbeque.

I did a bad thing according to some people. Yet, a whole bunch of people had fun that would never have happened without me being the Rebel I am. All told, it was a good thing. Just some people are upset. Maybe I should back up and tell you how we got here.

I've told you I'm taking a few days off. Katie and I are riding every day. Nothing you'd call long distance. In fact, the farthest we've gone so far is about 125 miles in a day. We're picking an event we want to check out and then riding around that. The weather hasn't cooperated totally. There's enough sun to dupe us into thinking it might be nice. The Weather Gods laugh at us for jumping on the bike. The laughter has taken the form of heavy drizzling rain. We get soaked and then get some more sun that almost dries us off. I feel like some sort of clothing sentenced to an eternal wash / dry cycle.

Today we wanted to check out a car show and a Family Expo at a mall. The car show was at a High School parking lot. Nothing really formal, just a group of car people getting together. When Katie told me it was happening in a school parking lot, I was reluctant to go. I pictured all these ludicrous gang-banger wannabe cars. You know, the Accura's with loudly annoying sub-woofers and those stupidly huge exhaust tips on tiny pipes. Katie gave me her pixie look and said "Hey, you can always leave if you don't like what's there". That woman knows how to play me.

Turns out my preconceptions were wrong. There were some muscle cars, some old bucket style roadsters, and so on. These weren't the highly polished cars and trucks you usually see. I almost hate those. The vehicles are great to look at but some of the owners act like the mere fact that you are looking at the car is going to lower its value. The only reason they even let people look at them is because they are so needy for attention. Their need outweighs their superior attitude.

This group was different. No trailers in site. The vehicles looked like they were regularly driven. The owners were down to earth and friendly. Like me, they enjoy the machines and companionship of like minded people. Score one for Katie. I had a great time.

Next stop was the Family Expo. We were mostly going for the music. The Expo's sponsored by a radio station that plays rock and roll oldies. There were local talents scheduled to play on the small stage. After that, the station was going to have a couple of hours of oldies. Sock hop stuff. On the way to the mall the bike spied a Starbucks. Turned in all by itself. Rather than disappoint the bike we had coffee. Actually, Katie drinks tea. Turns out that the gal at the register was one of my students during the first week of February. A wet, cold, very first class of the year. She looks exactly like Meg Ryan. Coffee and tea turned out being on the house. She said it was the least she could do. She swore that my class had already saved her life. You know how it is; to new riders everything is high drama. I'm glad she sees the value of training and I sure don't mind free coffee!

We arrive at the mall. It's in our home town. Today's mileage stands at about 63. This is when I sort of started my riot.

We did really well for a while. Katie and I wandered around with our gear and helmets. We watched Cub Scouts with their pine box derby cars racing on a wooden track. We watched children get their faces painted. It's a family expo and wholesome all around. Until the two-wheeled rebel started his evil. Sometimes Katie wishes I wasn't so shy.

It was time for the sock hop music. The DJ started spinning the magic. There's something about this music that makes your feet want to move. Pretty soon it moves up your body. Trouble was, the small stage is at the corner of a food court. There were tables all over blocking any chance to dance. I could see a bunch of mostly older people who were itching to dance. All this fun stifled by a bunch of tables and folks too timid to have fun. Ever see people try to dance with their butts nailed to the chair by fear of being "different"? It was too much for me. I moved a few tables to make a small dance space for Katie and I. Like I said earlier, I'm blessed to have a soulmate with a sense of adventure. We danced. In front of all these people. Let them eat their hearts out!

I could feel the air charged with electricity. All it would take is one spark to set off the lightning. Shy me initiated the spark. ( Here's a hint, I'm not really shy ) I turned to a group near us and said these fateful words:

"Hey, let's move a few more tables and you can join us!"

The group of dancers swelled slightly. As people saw us all having fun they couldn't resist. The fact that we were already out there made them braver. Pretty soon there were a hundred folks or so dancing. All the tables had been pushed to the outside of the area. It was a blast. Too bad people are beat up so much by society that they've lost the ability to stand up for themselves.

We danced about an hour then had to go. As we gathered up our gear and left the crowd burst into applause and yelled their goodbyes. The security guards and housekeeping folks gave us dirty looks. What could they do with the whole crowd now having fun?

Is it my years of riding and doing my own thing that's made me this way? Or was I born this way and gravitated toward riding because it suits me? It's like the age old debate about chickens and eggs, I guess. I'm just so tired of people being too meek to do what they want. Not bad things, but come on, it's only dancing in public for God's sake! What is it that beats people down so badly? None of that for me, thanks.

Tomorrow we're off to a dog show. I'm keeping the saddle bags locked. Katie's in love with Daschund puppies. No stowaways allowed, Sweetie!

Shy, yeah right. You're the guy that always made the rest of us feel like losers....

I suspect the bike has nothing to do with this sort of character trait. God passed this one on to you in the ether.

I bet the security people at the Mall were steaming. They hate anything out of the oridinary or not scheduled and planned. Spontaneous action equals riot. You're lucky they didn't drag your ass off.

I will have to file a Freedom of Information Act request to see what new entry is in your file...