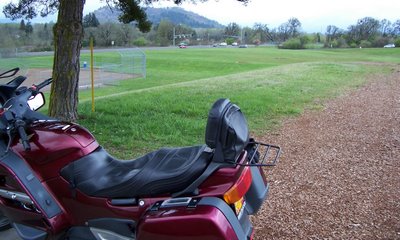 I had the opportunity to see how the ST does as an off-road bike. Yes, it was an off-road excursion that was PLANNED, not an accident.

This story ties in with riding to work. After all, it was in the town I regularly commute to, and I rode the bike to doing something I got paid for. That counts, doesn't it? Besides that, it's an entertaining story.

At the risk of sounding like an old guy reminiscing, this happened a couple of years ago.

It's early May and a somewhat sunny day. I had ridden the ST to work, as usual. There's a fish market downtown and their fish-n-chips were calling my name. Their parking lot's pretty small so parking is a hassle. Unless, of course, you are on two wheels. It's amazing where you can fit a bike. The bike and I get comfortable. That sweet motor gets shut off and the sidestand is deployed. About that time the cell phone in my jacket pocket rings. Good timing. I pull the phone out and thumb the button to make the connection. The caller's told they'll need to wait until I get my helmet off. The people who know me are used to that.

Turns out that the caller's from our motorcycle safety program headquarters. They've received a call from a small TV network that covers sporting events in the Northwest. The station's owned indirectly by Paul Allen of Microsoft, Trail Blazers, and Seahawk's fame. Seems they've recently covered a local runner's marathon. One of their camera operators rode backwards on a motorcycle and they got great footage. The Head Honcho was looking for a repeat on a track and field cross-country meet being held at Lane Community College. They were willing to pay $200.00 for the day and needed a good rider.

For whatever it's worth, my name was on the top of the list. Either because of my skills or because nobody else would be crazy enough. Did you catch the fact that it's a track and field meet? Marathons are run on streets. This would be on grass and sawdust. Was I up to the challenge? I think the real reason I got the call is that people know I will charge a challenge like a bull to a red cape. Of course, I was game. It would be extremely interesting, to say the least.

So, let's see. Not owning a dual sport, the ST was the logical bike. It was big enough to carry two people. I could take the saddelbags off. The camera person could sit facing backwards and the back rest would provide a means for them to avoid keeling over frontways off the back of the bike. I was a little worried about tires and traction, though. You can see the sawdust trail in the picture next to the bike. The trail goes down the hill to the road. The runners would go into the trees, make a loop to turn around, and then come back next to the main road. You can see that area toward the top and left of the photo on the other side of the baseball backstop. There's no sawdust there, only grass.

The tires were standard street tires for sport-touring. If I remember correctly, that set was Metzler ME-Z4's. They were just going to have to do, because there was no way I was going to buy knobby type tires for just one day. Although, if it worked out, I admit it might have been fun to go amaze people on trails with my knobby-tired ST1100!!

Saturday rolls around and I show up bright and early. Ok, not sure how bright, but I was definitely early. I noticed the grass was wet with dew but I figured it would dry out before too long. The weather was overcast but not actually raining. I find the camera crew and am introduced to my passenger, Chet. He's about 5'8" and around 200 pounds. The better for traction, I guess. Chet's got a friendly face but looks a little worried. Turns out he's not the same one who rode during the marathon filming. In fact, Chet's never been on a bike before. I try to establish a common bond by telling him I've never carried a camera-toting passenger before. It doesn't help. If anything, he looks more nervous. I finally end up telling him of my experience and skill level. That seems to reassure him. Hope it didn't sound like bragging, but it seemed to work.

It's a great idea to give a passenger the usual briefing. In this case, it's sort of hard to know what to say. The usual things don't apply. Chet can't put his hands anywhere but on the camera. I tell passengers that it's normal and necesary for the bike to lean. Just look over my shoulder in the direction we're turning. In this case, Chet's going to be sitting backwards on the bike and the speeds are going to be painfully slow. I finally end up encouraging him to keep his feet on the pegs as best he can and not to make any sudden movements.

The camera is HUGE! I've been interviewed for local news stations before and have seen the cameras. In those cases, my attention was mostly on somehow trying to say something meaningful and intelligent. The camera was mostly background. Now I get a good look. This guy's bulk combined with the camera being held up high will make for interesting riding. Especially at lower speeds!

There happens to be one of our beginner classes being conducted on an upper parking lot and I snag an open face helmet for Chet. The helmet is refused since it will interfere with filming. Well, the offer was made, anyway. The next logistical thing to work out was getting Chet on the bike. Think about it. Normally a passenger just puts a foot on one peg and swings the other leg over. If Chet did this, he couldn't get his leg over my head. I wasn't about to be kicked in the helmet. I finally had him hand the camera to someone else. Then he could put his right leg on the peg, sort of awkwardly swing his leg over the backrest, then get the camera back. It was ugly but it worked.

The actual filming went pretty smoothly. The plan was for me to ride just ahead of the runners mostly. The trick was to go slowly enough to keep close to the lead runners but not so slowly that we were any sort of physical or psychological roadblock. I have to say that we got the hang of it pretty quickly. Chet was good about telling me precisely and concisely what he needed me to do. We even got to the point that we started getting fancy. I found a stretch where I could pull off to the side of the runners and let them catch up. This allowed Chet to film the middle of the packs. We could then gracefully zoom up in front just before the path got squeezed back to a single trail.

The ride itself wasn't so smooth. A street suspension with limited travel can be a little rough over gopher holes and stuff. It's amazing how you can look out over a field of grass and it looks so level. Riding over it is another story altogether! I was worried that the camera's picture would be too fuzzy due to the rough ride. Modern technology is wonderful. The camera has some sort of electronic leveling system that compensates. Even this couldn't triumph over some of the bumps, though. A few times all I could do is wince as we hit some nasty bumps. Fortunately, we weren't the only camera. There were folks filming in a large number of spots. We were the mobile crew for the real color shots.

Chet had proven himself a pretty good passenger. He soon learned not to lean over too far or stand up too straight. I learned a lot about riding a big street bike off road. ( Ok, it's not wild off-road stuff for a dual purpose bike, but it was pretty extreme for my ST! ) We had settled in like a well-oiled mechanism. Until I decided to shake things up and try something new, that is! 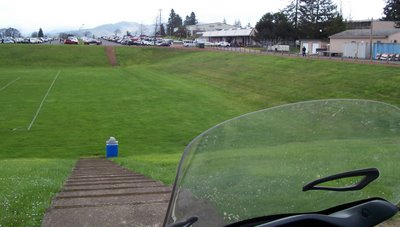 A need arose for Chet to be at the other end of the fields ASAP. He asked if we could do it. The routes we had been on were filled with runners so I looked at alternates. The other picture you see is looking down the stairs into a depression where the actual track and soccer fields are. There are two of these side by side with a hill between them. These weren't being used at the time. I told Chet to hang on and down I went into the first one. About halfway up the hill on the other side I began to wonder what I had done. I felt the rear tire start to spin and slide slightly sideways as it searched for traction on the grass. Remember, this is a street sport-touring tire made to last a lot of miles. It's not really designed to run uphill on grass.

Many thoughts ran through my mind including a few off-colored words. My only reasonable choice was to stay committed. There's no half-way. Either we're going all the way up or we're falling down. Much to my relief we burst over the top and down into the second pit. Coming up the side of the second pit was actually fun, now that I knew I could do it! I even spun a little on purpose. Chet wasn't scared at first. After all, he was facing backwards and didn't see what was coming. I think it caught up to him when he looked back and saw where we had just come out of. Actually, to be more accurate, I think it was when he felt the bike heading downhill again. The grassy rooster tail coming up in front of his face on the way back out didn't help any, either, I guess.

All in all it was a successful day. Fox Sports Network got their coverage. I collected $200.00 which meant I got paid to play. It was fun but I just haven't had the urge to go play on the grass, again, for some reason. I did volunteer and ride as a motorcycle escort for a bicycle ride to the coast. It was a fund raiser for cancer research. All on pavement and a great day. But that's another story!

Miles and smiles,
Dan
Posted by irondad at 5:05 PM

You sure get yourself into some odd situations. I've watched motorcycles do camera work with bicycle races and I thought that was sort of stressful since those professional bikes move pretty fast. Riding on wet grass is a whole new challenge.

Glad you made it over the hill and didn't fall down. You know the camera man would have recorded it for you!

thanks for the link to this posting....cool stuff but I've zero experience with a passenger except for like 2 minutes of going around the block with my wife in back of my R80....it felt weird.

still, something to explore, I sure would like to be a motophoto, once anyways, during an actual bike race....ON PAVEMENT.