Circumstances have conspired such that I haven't been able to ride since last Tuesday. I'm about to go nuts. As I write this I'm looking out the window. Rain is blowing sideways and water's puddling up in big slop holes. I don't care. When this post is done I'm out there! It will be a lot like last Monday.

Wednesday thru Friday last week were spent shuttling various factory people to and from Portland International Airport. I don't know why everyone suddenly needed to visit Oregon at the same time. In between airport visits I played taxi and took them to the places they needed to go. A couple of the nights included evening functions. At least I got some free meals out of the deal. Late nights and early mornings meant being banished to four wheels. I guess it will be a while before two wheels can totally replace four. Sigh!

A week ago today we had a major windstorm. Here in the Valley gusts were around 50 mph. An hour away, at the coast, wind gusts reached 90 mph in some places. With such strong wind and rain I stayed in close to home, near the fire and warmth. Exercising prudence was my first priority. Did you really believe that? Sounds cozy, doesn't it? How long have you been reading this blog? Have you ever known me to do the "prudent" thing and stay out of bad weather?

I love riding in storms. Romantic pictures of quiet heroism flash through my mind. The brave captain at the wheel of the ship personally tackling the forces of nature. Captain Ahab putting all dangers aside in his pursuit of Moby Dick. Will my own singleminded pursuit of my passion eventually lead me to a similar ruin? Perhaps. Rather than scare me off, the thought of my end spurs me to savor the moment even more.

By Tuesday morning the worst of the storm had blown out. I took off early on Sophie to make a couple of calls in Portland and then visit the office. The wind was gone but it had left behind a hazard of another sort. 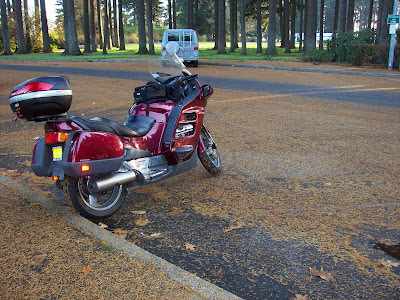 A couple of cups of "wake up" coffee combined with temperatures just above freezing caused me to need to make a stop. You know the kind I'm talking about so I won't go into too much detail here! Pulling off the freeway into a rest area found me dealing with a whole different traction situation. 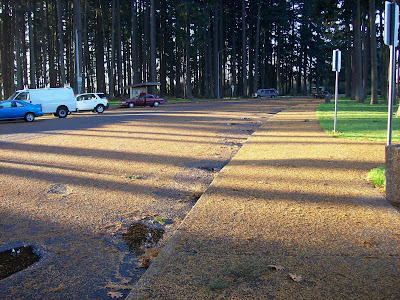 The pavement was covered in wet evergreen needles that had been "liberated" by the high winds. It would be dramatic to say I peeled off the freeway and suddenly found myself sliding all over as I fought for braking traction. I've been called brave, borderline reckless, but never stupid. How many times have I preached from this pulpit about keeping our eyes up? How often have I beat the drum of getting critical information as early as possible? The earlier we get information the more time we have to make better decisions. Practicing what I preach, the dicey traction was not a surprise to me. It was, however, still interesting. There was a pretty clear path for braking. Pulling off the tight maneuvers required to turn around and back in was kind of cool. 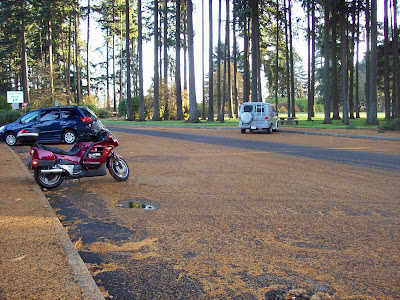 My comfort level with this kind of thing is pretty high. Years of riding in every kind of weather and conditions have made such things second nature. There's no substitute for experience and exposure. That's why I always encourage riders to stretch their comfort levels little by little. Check out riding in questionable traction under controlled circumstances. Don't wait until you're in an emergency situation to figure out how to react. No matter how much one prepares mentally, it's not going to be enough. Knowledge seems to evaporate in high adrenaline situations! I think it's a side effect of sphincter clenching, personally. Habit will rule. What that means is muscle memory. The only way to ensure the muscles have the proper memory is to train them by means of repeated practice.

The rest area wasn't the only place showing the after effects of the high winds. Thousands of leaves have been hanging onto trees, waiting for the right moment to drop to the street. The wind storm took the decision away from them. Many of the streets I rode were covered in the multi-colored fabric of autumn foilage. Thousands of leaves experiencing their last moments in their current form. A brief splash of color to enhance the street's drab gray. And to foil those looking for traction upon their sodden surfaces. 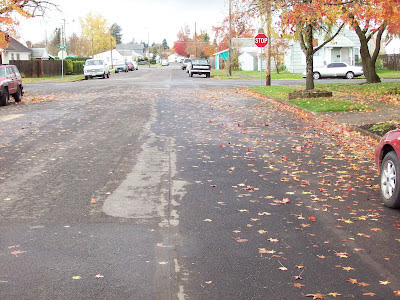 The main drags were relatively clear due to the relentless stream of cars. Turning off onto side streets revealed a different scenario. You can see leaves covering the road all the way across. Stopping at the intersection can be a little tricky. So can encountering the wet leaves as you bend the bike through the corner. I saw several cars sliding on the leaves. Sort of made me wonder what I was doing out there on a bike. Well, for a nanosecond or so, at least. 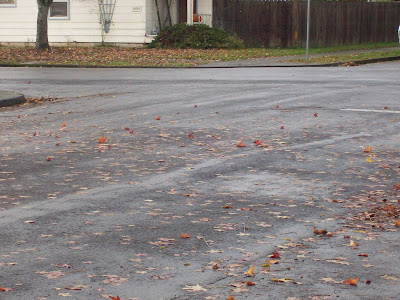 I managed to avoid problems by aggressively scanning the area coming up. Small adjustments made early kept me out of trouble. I never even slid a wheel. More than could be said for those around me in cars.

It's easy to see why some riders choose not to ride once conditions get more difficult. More power to them, I say. A person needs to weigh the risk and see if they're up to it. If not, they avoid it. What more can a person expect than that someone ride within their limits? However, if a person's willing to work to increase their skills, the riding season can be extended. Why miss out when they could play some more? I love helping riders discover that their limits might not be as low as they think.

Speaking of training, that part of me wants to share just a little more here. At the risk of making this post too long, this little voice inside my head tells me that I haven't really helped like I could here.

It's saying, "Folks know that leaves and stuff can make the streets slick. What do they do about it? You told them to get information early and make adjustments. What do they do if something makes them have to do a lot of braking in these conditions?"

In order to quiet the voices in my head I'll share this.

Maximum braking without skidding either wheel on dry pavement requires more front brake combined with less rear brake. Remember weight transfer? As a rider applies the brakes weight is transferred to the front wheel. The added weight provides more traction for braking. Traction being defined as friction between the tire and the road. Since the weight transfer doesn't happen instantly, the pressure on the front brake lever is smooth and progressive. At the same time, weight moving forward means the rear wheel gets lighter. Less weight means less traction. This requires a rider to gradually decrease pressure on the rear brake pedal. Or, in the case of a scooter, one hand squeezes more while the other hand lets up pressure.

Ok, we all remember that. What changes is when overall traction is reduced. As is the case on pavement covered in pine needles, for instance. The front tire isn't going to get as good a grip. Which means that less weight will be transferred forward. We can't use quite as much pressure on the front brake lever. With less weight being moved forward, the rear tire will retain a little more traction. In situations with less overall traction, the rear brake is more effective for a longer period of time.

When stopping normally in dubious traction conditions try using more rear brake and less front brake. I'd much rather take a chance on sliding the rear than the front on slippery roads. Skidding the front means an almost instant crash. That's something to be avoided very vigorously!! Skidding the rear allows a little more margin for error, should that happen. Keeping one's head and eyes up and looking well ahead will help the bike stop in a straight line. Of course, the real key is to practice braking without skidding either wheel under a variety of traction conditions.

For quick stops, try applying the rear brake slightly before the front. This will help keep the bike level. In a normal quick stop the front will dive while the rear will rise. Using the rear brake first will mitigate this to some extent. It's critically important to be smooth and progressive with both brakes. Never succumb to panic and do the "grab and stab" thing that gets so many riders into trouble. Use a little more rear brake and a little less front brake than you would on dry pavement. Paying attention to the bike's feedback will clue you in to how much pressure is appropriate.

Just to recap, when braking in situations where traction is questionable, it's even more critical to be smooth. The rear brake will be more effective because there's less weight transfer. It will be easier to skid the front wheel so use a little less pressure than normal then modulate as circumstances allow.

Ok. Gotta go. Must ride. It's who I am, it's what I do. While I was writing this the rain stopped and there's even a little sunshine! Time to go kick up some leaves in my own whirlwind.

That doggone storm last week had me contemplating donning a hardhat and an adult diaper. Too much airborn debris sailing by at nose level for my comfort. I too hung in by the hearth.

My sister finally got her power back on Friday. The PUD told her that the winds were clocked at 92 mph at her house. She lives only 8 miles from my place. Wind blows!

It's probably a good thing for you to stay off the bike every now and again. It's a chance to stretch those self restraint and acceptance muscles....*grin*

After windy storms we get a lot of the kinds of road debris you talk about and it can be dicey. We also seem to get a lot of tree branches and trees coming down as well so there is ample opportunity to pay extra attention.

Your post has a lot of great advice and reminders on how to manage these kinds of changes in road conditions. I'm not surprised that the cages seem oblivious to it but I am surprised when I see riders still zooming along like nothing happened. They just don't teach these things in the MSF classes.

It does seem like you all get it worse up there. We only had blips in our power with no outages. Just wear your full face helmet next time. Won't help with the diaper problem, though!

Self restraint and acceptance muscles? Do I have those?

In our training program we spend a lot of time on how to deal with difficult situations. We also heavily stress ridng within the limits of the bike, the rider, and the environment.

We're not actually connected to the MSF anymore. I might put up a post about that in the near future.