A little better than I thought.

I figured I would put closure on the photo contest since I've mentioned it. My goal was to put some of my photos out and see how they compared to the rest of the entries. I'm pleased to say that my photos looked like they belonged. I even did a bit better than I thought I might with a couple of them.

The invitation for the contest says that it is open to photographers of all skill levels. It actually showed in some of the prints. Everything had to be displayed at 8" X 10" or 8" 1/2 X 11". In addition, a backing of 1/8" thickness was required. I have an entry level Epson printer which did a pretty good job of making the prints. Some of the photos were exceptionally crystal clear and technically superior. Not so much when it came to composition and subject. I'm learning that if a photographer shoots things that appeal to them, and can capture what it is that enthuses them, the viewers will be more readily moved as a result.

There were somewhere over three hundred pictures divided between six categories. The contest sponser is a local visitors association. The photos needed to be taken within the last three years, the subject needed to be in our county, and could not have been previously published anywhere. There was an "Open" category in which the subject could be anywhere in Oregon.

I had no photo in the "Scenic" category. There was a "Local Events" category in which I entered a couple of hot air balloon photos. As did almost every other entrant. This was my best entry. At least I thought so. The other photo was a close-up for the fire coming out of the burner. 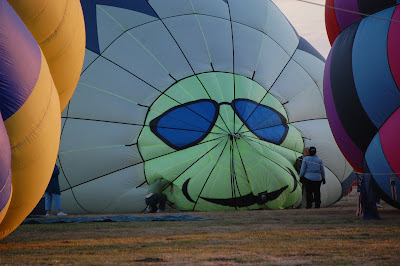 The actual print itself was lighter. This was taken not long after I took the class and was just getting started. The composition is good but the technical details like lighting are a bit off. It didn't place. My photo was only one of about thirty balloon pictures. Interestingly, the woman who took first prize had a very nice picture of the balloon fabric itself. It was backlit and the design made a sort of flower pattern. Quite well done!

I entered one photo in the "Open" category. It just seemed unusual. I like unique angles and subjects. Here's the photo. 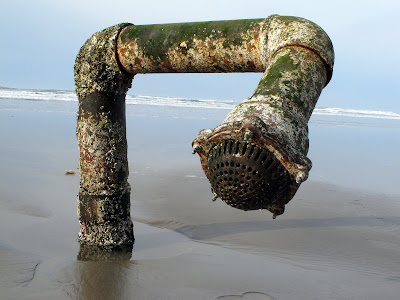 This one didn't place, either. The winning shot was of a pair of wire rimmed spectacles sitting on the brim of an old straw hat, and with a pair of leather work gloves. Only about half the hat and gloves show in the photo. It's a very contemplative picture. Second place was a photo of a purple orchid looking flower.

Another category was "Life in Our Community". I had no entries in here. First place was an exceptional photo of a woman who looked to be Amish in her kitchen surrounded by corresponding cooking tools and making bread. With the colors, lighting, and clear focus it is an outstanding photo. Bluekat might be interested to hear that the second place photo was of two bicyclists coming out of the Larwood Covered Bridge.

Another category was for digitally manipulated photos. It was interesting to see everyone's artistic intrepretation in this class. I entered three photos which didn't do too badly. 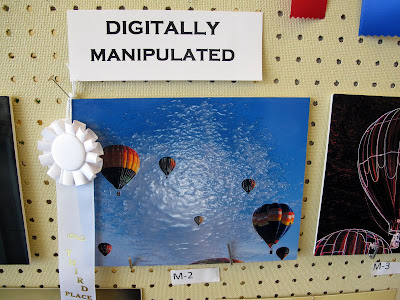 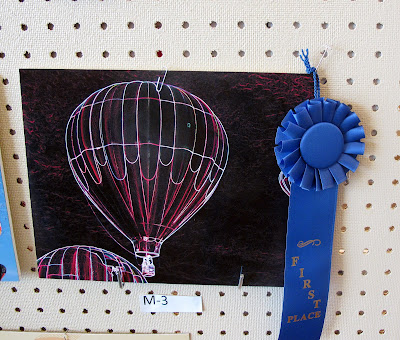 First and third. I'm quite pleased and surprised. You saw the red balloon photo here a couple of posts back. On a lark I made a stormy red background and called it "Red Sky at Morning". Here is the whole photo. The ribbon covers the balloon on the right. I think the brightness of that small balloon gives an offsetting contrast to the general darkness of the photo. 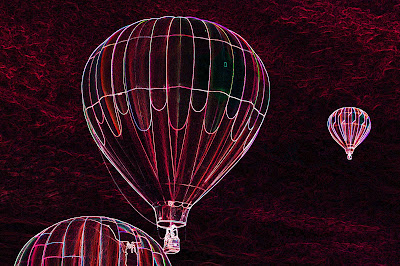 The last category was "Landmarks". As you can imagine, this category also had a lot of entries. There were pictures of churches, railway trestles, local statues, a train station, covered bridges, and so on. I entered one photo. Not touched up at all. I called it "Pink Pixels". Sort of a play on words between the name of the theater and the digital origin. It ended up doing all right. 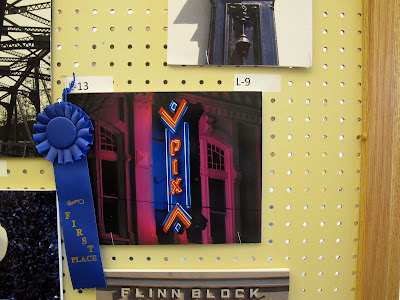 The irony is that I had entered the other version of this in the "Digitally Manipulated" category. This one. 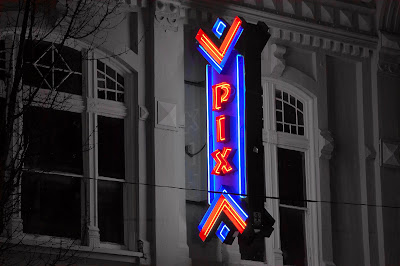 I don't think it even got a sniff. The ironic part is that, between the two, I'm most taken with the gray scale / color version. I think it's because of having learned how to do the technique and having spent so much time on it. I posted both of them on the blog and most of the comments favored the pink version, too. Granted, it is a beautiful picture. There was just enough fog in the air to make the glow but not obscure the building. It's clear that the judges agreed with you, too!

There are no cash prizes. First place ribbons come with some gift certificates from the Shutterbug camera shops. Which is pretty neat and fitting.

As Bryce so rightly pointed out, the real test is in bigger contests with highly skilled competitors. I have no illusions in that regard, yet. This local contest was a measuring stick for me. It's just nice to know I'm in the general neighborhood, you know? Speaking of neighborhoods, even though I'm just an enthusiastic shutter presser, I sincerely appreciate how folks like Chuck, Bobskoot, Conch, Steve Williams, and others have offered guidance and shared wisdom.

The reception was quite informal. There wasn't an official handing out of ribbons. The judges simply put the ribbons on the photos beforehand. I met some fellow photographers. Nice folks. Not as cool as those who both ride motorcycles and take photos, but interesting nonetheless.

Afterwards, Katie and I went to Applebee's for a beer and an appetizer to kind of relax and soak it in. 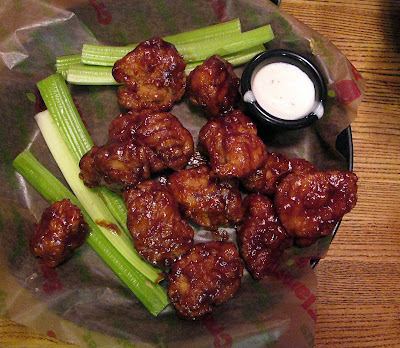 I like a porter beer. They had a good one on tap. Perfect! 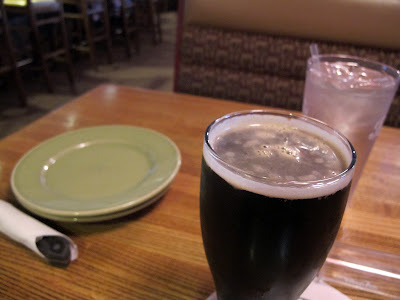 While I was fiddling with the aperature setting on the G11 I accidently snapped a shot. It looked kind of twirly, which was cool. So then I tried my hand at doing it on purpose. I dialed in a bit longer shutter speed then slowly rotated the camera while the shutter was open. This is kind of what it looks like if you drink too many porters! 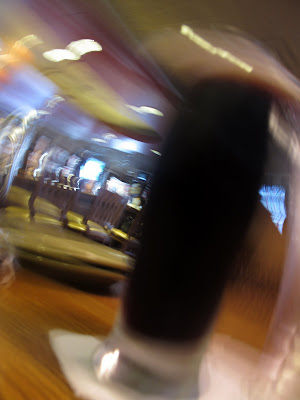 Actually, a couple of the coolest "rotated camera" photos I've seen were posted by Sharon here. Scroll down towards the bottom of the post.

Anyway, all in all a fun and satisfying venture. Small potatoes that it may be, I am now an award winning photograhper! :)

Congratulations on your contest performance. You make some strong images. Cameras and picture making can get pretty addictive. You better watch out.

If you get tired of making your own prints there are some inexpensive options that deliver pretty stellar results. MPIX.com is one. Kim is having a show next week and she asked me to upload five files this morning for 16x20 prints. Around 11am I got an email saying that FedEx had them and they would be at my house on Monday.

And with an inexpensive MCS Black Format Frame they will be on the wall for less than $20 bucks each.

Anyways, I look forward to seeing your pictures.

Congratulations Dan! Well done! I really like those balloon shots and both theater images too. You're progressing at a rapid pace and it's obvious that you really enjoy photography. It's nice to see your experimentation with it too. That's one of the neat side effects about photography, we all get inspired by each others work. Looking forward to more photos.

Congrats, Dan! Nice work. I think addiction to photography is much easier now that we can see our images immediately after taking them. And we can take as many as our ever larger/cheaper memory cards will allow...

Congratulations on the photo contest. I really liked the Manipulated "Pink Pixels" image. I'm surprised that it didn't do better. GAW

I'll add my congratulations to all the others. I enjoy looking at your photos in your posts. I find the "digitally manipulated" ones particularly interesting. I really like the B/W version of the theater sign. I have never played around with Photoshop and only use Aperature for white balance and exposure. I guess that may qualify as manipulation.

Awesome job on the photos!!
& thanks for the mention. I like what you said about photographers shooting what appeals to them. I think that's an important point. It's fine to know the rules of composition and the technical aspects of photography, but it's going to fall flat if you can't infuse it with some of the passion you feel for your subject.

I agree with you about the little balloon. Isn't it funny that the smallest element plays such an important part of the whole composition. The little balloon gives depth to the photo that's missing without it. I like that you cropped the lower ballon as well. It creates a sense of floating into and out of the scene.

I really enjoy looking at your pictures. Congratulations on your multiple ribbon winners! Just enough encouragement to keep you snapping, heh?

I've often thought about increasing my knowledge and experience with the camera because I too, love taking pics and sharing them. For now,I do the best I can with my little Fugi S5100.

Thanks for taking us along... keep up the good work!

for the next contest, you should built into the photo, like an artist signature, your blog's URL!

You are a man of many talents. I promise to occasionally think of you as a gifted motorcycle rider.
Congratulations!
Not only do you inspire me me to become a better rider, but now you have caused me to consider taking a photography course. Darn You!

congratulations on all your ribbons. It validates your efforts. learning so much in such a short time is unbelievable, as mentioned above is due to satisfaction in seeing the results immediately, unlike the old days when you get your prints back a week later. experimenting with film is so costly.

Let me add my congratulations as well! I've never won a photo contest ... but then I've not entered any, either, so that makes it tougher to win -:)

I do like your Porter photo. Lots of interesting stuff can be done with motion and a still camera, as you're discovering. Keep it up! (Both the Photos and the Porters!)

SO you got a pocket full of discount vouchers, spent it yet??

Have an awesome week!
peace

Congratulations on recent success as a photographer. I like the shot of the pipe coming out of the sand and the grayscale shot of the "Pix" Neon sign too. I'm sure this is just the beginning of many successes for you.

Wow! You actually said I "make" an image. I'm beside myself!