The first day of summer arrived early this morning with a bit of promise. I looked out my front window at 5 AM. As I did I felt like a teacher looking at a struggling student. This has been the wettest June on record. Like a pupil that you just know has the potential to shine, this day could turn out all right. My optimism was rewarded. After riding under grey skies in the morning, the afternoon's return journey was done under mostly sunny skies. Yes, I think Spring is finally going to graduate into Summer.

Not only is today the first day of Summer here, but it is also Ride to Work Day. Andy Goldfine's great idea for promoting the use of motorcycles for practical transportation. Not only that, but it's a show of force at work places. Take us seriously. Work with us. We're motorcyclists. On top of that we are fathers, mothers, sons, daughters, and so on. We're the valuable employees that contribute so much to the success of the companies we work for. Celebrate the fuel efficiency and smaller demands on the earth's resources with us. Give us parking spaces close to the buildings. We don't take up much room. Give us our own space and you'll have more parking left for those still piloting the cages.

I'm afraid I fell a little short in that particular effort. You see, I have no office or place of employment to commute to. There are no fellow riders to join up with in the parking lot. Riding by myself for work doesn't seem to constitute a show of force. Although there are those who would argue that point. I've been called a Force of Nature. Those less kind say I'm a Freak of Nature. Whichever.

So I rode for work on Ride to Work Day. I had a meeting scheduled with the Director of Security at Warner Pacific College in Portland. Since this was a new contact for me, I decided to make the first impression one of a motorcylist. Thus I showed up on the bike in full riding gear, including my TEAM OREGON retroflective vest. 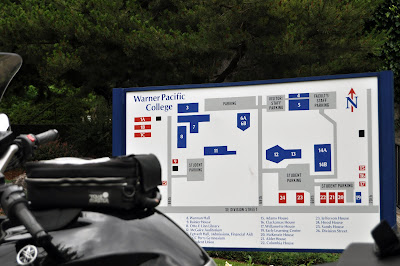 My instructions were to show up at the main entrance and call the guy on his cell phone. Good plan. Although, as I explored the lot, I discovered that all the parking spots required a student parking permit. Visitor parking was up the hill. Elvira is parked right in front of Building 12 shown in blue on the sign. Visitor parking is up the hill, or towards the top of the sign. So I mounted up and parked up there. Which meant I needed to walk back down the hill. This has a point to it. I'm getting there now.

As I'm walking back down the sidewalk I call the guy I'm supposed to meet. He's nearby. In fact, while he and I are talking he says that he thinks he sees me. "Are you the guy in the vest walking down the sidewalk?" he asks.

Mission accomplished. His first impression of me was exactly what I was aiming for. A security professional who happens to ride a motorcycle. 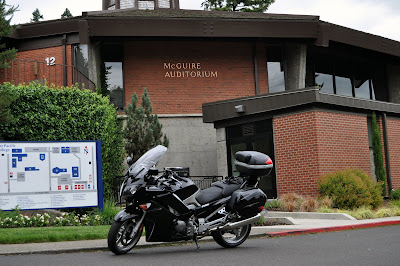 It's a beautiful campus, by the way. The header photo is one I took from the opposite side of Elvira.

From here I figured the best thing I could do was ride around so as many people as possible could see me on the bike. Tough job, but we all need to sacrifice for the cause, right? Hey, that's harder than it sounds. It meant I actually had to be riding, not holed up in a Starbucks! Somehow it took twice as long to get home as it did to get to the meeting. Weird how that happens. The total for the day was 164 miles so I figure we got a bit of exposure. 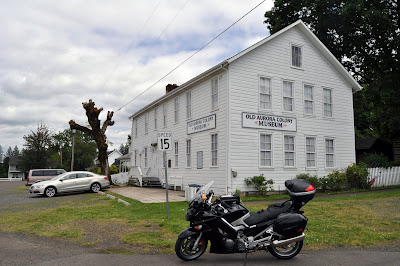 On Highway 99 there's a very small town named Aurora. I had the urge to tour the museum but it was closed. There was a small colony of settlers here originally. Sometimes one of the hardest tasks in life today is to keep perspective. Wandering around this museum and the old shops out back help me do just that. We have it pretty easy these days. Too cold and wet to ride? How about a long ride on a horse with just a rain slicker and no electrics? When I get home I park Elvira and retreat into a warm house. Back then I'd still have to take care of the horse first. Things aren't so bad after all. Perspective is a wonderful thing to have in any aspect of life. 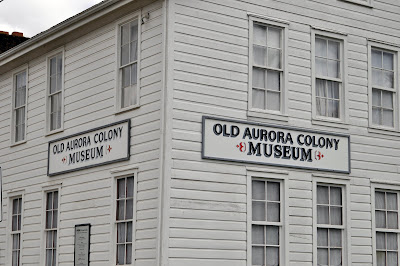 It felt like everybody and their spawn were out on the roads today. Freeway or back road, it was busy. Had I not been on my toes I could easily have been taken out at least once and probably twice. That got me to thinking about some tactical training I participated in recently. Suddenly I had this connection to something we discussed there and motorcycling. The next post will deal with Tactical Thinking for Motorcycists.

While I was on the road I heard my cell phone's text message alert go off. Later on I took a look. My son Clinton had sent me a text. At the risk of embarrassing him, here's what it said.

"Rode the bike to work today, I'm the son of iron-rider, I had to!"

Dang. We strive so hard to set ourselves apart. When we succeed we feel pretty good. Suddenly we have to ask ourselves what we're doing to our kids!

I sent Clinton a reply.

"Sorry. Being the son of a legend must be tough."

Let him deal with it. I still have dragons to slay!

But there is something to be said about leading by example. I see a few people at my office building sort of shake their heads and maybe grin when they see me enter the building with my gear on day after day. They know why I do it and deep down I think they respect it.
I think I got a wave from every other rider I encountered today. And there were seemingly a few more out today.

It is well-known among my circle of friends that I work at home, so ride to work days was merely a matter of getting out on the road duringf that 9 to 5 interval and being visible.

On the loop of roads I chose to ride, one was milled for repaving, another was closed for construction, and a third was choked with traffic. As I rode my vintage K75 (legs down, 2 feet at a time, for three miles), I listened to the reassuring sound of the cooling fan coming on 36 times in 200 feet.

Sometimes, it is hard t make a noticeable public statement.

So you were cruising around on my turf yesterday! We're both in the same boat... no place to call home during the day. Just riding from one place to another. I guess that makes us like some sort of riding gypsies. Nice photo at the museum!

Tough job, sacrificing for the cause - lol
I'm glad you stayed safe on the road. I didn't work Monday, or even get on the bike - some example! I rode today though, and I thought there were more riders out. Maybe it's just the better weather, but it's good to see.

that's what I did last weekend. Riding aimlessly and doing errands in no particular order.

during the week I have to end up at the office. Only 3 of us ride regularly, but only 2 of us on monday

Leading by example is a worthy goal, for sure. Not only do people respect you deep down, I suspect they envy you, too! You daredevil accountant, you.

Two hours of a public statement by you is equal to five hours by everybody else. I would not think you would either be ignored or let yourself be overlooked. You're a force of nature, after all! Either that or it's the fact that the bike spends a lot of time on its side.

Exactly. Where would we all be without legends? I vote for you as the John Wayne of photography!

Riding gypsies. Sounds so much better than "roadies" doesn't it?

Ride to Work Day wasn't started for the purpose of making people feel guilty, you know.

I'm seeing a lot more bikes, too. In December I was lonely out there. Now I'm starting to feel crowded!

Having your bike in the office parking lot is what Ride to Work Day was intended for. You made the statement,my friend.