Which Way Does the Shiny Side Go, Again?

Um, I'm not exactly sure how this happened. 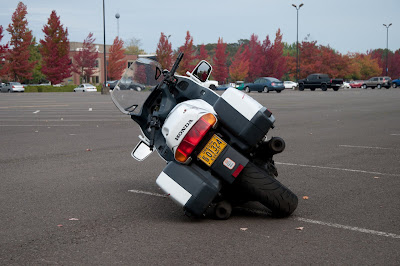 I AM pretty sure, however, the bike isn't supposed to look quite like this. 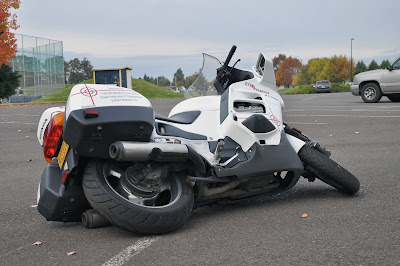 There's also a better than average chance I'm in trouble. This isn't my bike. It belongs to the training program. I was the last to touch the STeed. Now it's on its side. While you're at it enlarge the above photo. See the big scratch on the underside of the right muffler? I put that there during a police class on a track. This is also the bike I did the 100 mph front wheel skid on. Which we recovered from nicely, thank you.

In contrast, this isn't such a glorious moment. Hero to zero? 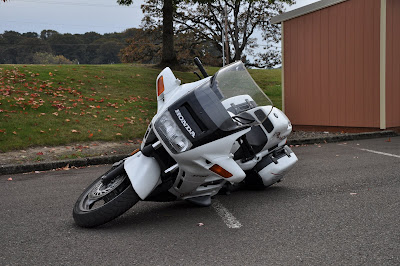 Or maybe this is what happens if you let a bike completely run out of gas. Nap time.

I bet you're prepping to teach the "how to lift one's motorcycle from the ground" maneuver!

Could be the look what happens when in a hurry and you forget to get the side stand all the way down club.

Blame it on the wind.

After all it does have red crosshairs painted on the side case.....I'm just sayin'

that's why there are scratches on both sides.

I don't see dirt for a nap. And I don't see tight curves. I'm stumped. I am wondering if it is teaching that petite woman in class how to master picking up a bike. :)

More of those shrooms?

DOnt worry Dan, it will buff right out....

Whatever the lesson is... please tell me you picked that poor baby up! It looks sad... just laying over like that. :(

We just can't have nice things.

That looks like the diagram in the Honda Service Manual for draining oil in the field.

I thought you taught riding??

You are such a cynic! Accusing me of a set-up? You act like you've met me or something!

You're close, but it's not for this blog. Update to follow.

Glad to see you're still around. Haven't seen anything new over on your spot for a bit. Thanks for hanging out here.

I almost did that the other night. I got home really late from our headquarters in Washington. 19 hour days will do that!

I saw that happen to a guy's bike once up at Crown Pointe. Blew the thing right over.

Maybe having something that looks like a target on a bike is not such a good idea, eh?

Note to self: The goal is to lift the bike to upright, not flip it like a pancake.

Thanks for your help. I always having trouble remembering to only push halfway. :)

You are on the right track. Although in this project the model isn't a petite woman!

Hey, when you find a good thing stick with it!

Actually I finally understand your fondness for bicycles. They are so much easier to pick up. :)

Do you know where I can buy rubbing compound in large barrels?

Yes we did pick it up.....several times!

You know, that's exactly what Katie said to me after I used her velvet Elvis to polish the scratches out. Weird.

Yes, I do teach riding. However, that requires the bike to be in an upright position.

Just like any other sport, sometimes you have to spend a lot of time teaching someone how to get the ball into play in the first place.

At least, though, you didn't scuff up a brand new K1600 that still belonged to the dealer. I won't name names... but I was there for one of those. A goldie should just lean and be alright.

No matter what the circumstance, whenever I see a bike on its side, I want to go pick it up. It just looks wrong and I am overcome by a desire to stand it back up.

As with the slot machine, "TILT!"

Mind this entire exercise is probably intended to make sure we are on your side.

Nice machine, the orange license plate is great for the festive season.
Now do we place a pumpkin at the wayside or do we place a turkey in the same position?

Either way suspect we the reader are being lead down the garden path to see Flora and Fauna except they are''t there any more.Sort of like
a beached whale on its side.

Hmm maybe the next tide will re-float the device and somebody else can have salvage rights? Eh?

Nice machine too bad about it's tilt status.

So you're not just roughing up the clear coat to throw down some flat black paint and cover up all the, echh, white?

I totally agree. The bottom of a bike is something you should never see outside a shop lift. Kind of in the same category as Grandma's underwear!

You're one of those cynical ones, aren't you?

I'll bring the pumpkin if you know where we can get a Canadian Turkey!

Unlike linen suits you can actually ride a white bike after Labor Day.

Real men aren't afraid to be seen on a white motorcycle. The fact that Elvira is black should not enter into this discussion!

So I was out with [unnamed individual] in Sioux City, IA. I had planted the seed of the K1600 in his mind over a year before. He had made up his mind to test ride one, and we had ridden over 100 miles for the event.

We go out, we do the standard loop. After we do it a couple of times he says, hey, that looks like a good spot to check out low-speed maneuvering!

Turns out it was the perfect spot, a MC safety course. We were doing the tight S-turns. (which I think is the same as the cones drill everyone was talking about half a year ago) at the end he tapped the brake instead of the gas and dumped the ONLY floor model the place had. They couldn't even get another one for months! The best part was that the safety instructors were a nearb building and saw us. They ran out. We thought for SURE we would get a butt chewing. The first thing they said was Are you alright? Then, Is that the new K1600? I've never seen one of those...

The proprietor only said. Oh, [unnamed individual] that's why we have the standard loop! In spite of the scuffing, he bought one anyway, it was delivered a couple of weeks ago, and he LOOOOOVES it.