Ok, here's the rest of the story. I can't believe that my so-called friends were so cynical about this.

"Looks like a set-up." "Somebody is leading us down the garden path." "Look's like you're getting ready to teach us how to pick up a bike."

I somewhat sheepishly have to admit that the cynicism was justified. Technically this isn't a post about how to pick up a bike. It's a behind the scenes look at making the video. Sort of like the extra features section on the DVD's you rent.

Meet Pat Hahn. He's the guy in the red 'Stich in the photos below. Pat is the Communications Manager for the TEAM OREGON motorcycle safety program. His duties include our website content.

Pat, knowing that I have an interest in photography and own a camcorder, called and asked if I would like to help him make a short video on how to pick up a bike. Always up for a bit of fun, I immediately agreed. Besides, I like Pat a lot. Thus we found ourselves in a parking lot with a hapless, but perhaps not totally defenseless, ST1100. This also happens to be our Eye Tracker project bike. That explains the paint scheme. More on that in a later post. 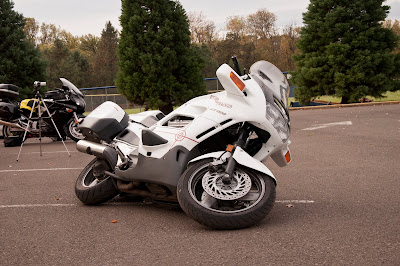 It seems like in every class past the basic training somebody asks about the proper way to pick up a tipped over bike. Pat's idea was to post a short video on our website which is in the process of being updated.

Pat came to us from Minnesota. He did a similar video back there and claims the page was the most frequently visited one on the website. It will be interesting to see what happens here. The best bet is to not drop the bike in the first place but it happens. Been there, done that myself.

Before you can pick a bike up you need to get it onto its side. One way, of course, is to simply tilt the bike up, kick the sidestand out from underneath it, then let go. Since we're true bike guys neither of us had the heart to do that. Here's a photo sequence of Pat lowering the bike so it could be picked up again. 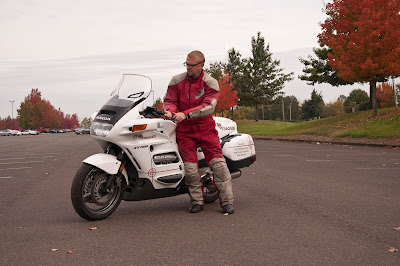 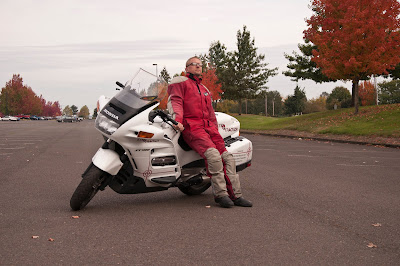 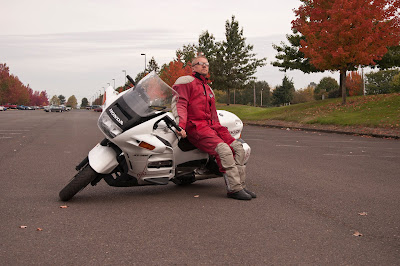 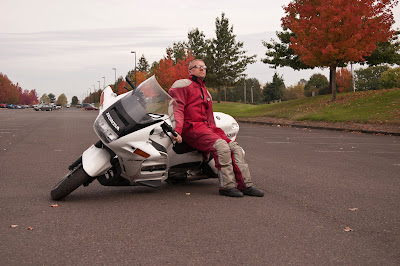 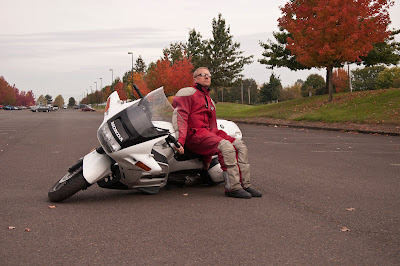 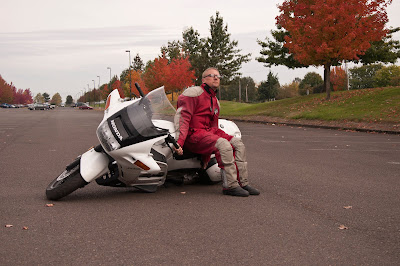 Pat looks good, doesn't he? His glasses aren't steamed up and it hardly looks like he's exherting himself. Actually, done properly, it's much easier than it looks.

Pat did the lifting while I played the part of the off-camera narrator. Kind of like the old Wonderful World of Disney shows like "Charlie the Lonesome Cougar" narrated by Tex Ritter. Come on, I know some of you are old enough to remember that.

If there's enough interest I'll ask Pat's permission to post the finished video here. The video is on my SD card and also loaded into my computer's Adobe Premier Elements video production program. One of the takes was video only with no sound. Maybe I'll be playing Bobskoot and doing some sound dubbing.

The video is more or less the intellectual domain propery of the program even though I have physical possession of it. I'm sure permission won't be a problem, though.

I picked up my Suzuki from a drop. OMG I hate that feeling of a bike going over! The Suzi had highway bars, so she wasn't over far. I worry that if the Ninja goes she'll be flat on the ground with no chance of getting her back up.

I remember Charlie the Cougar. One of the first movies I saw in a theatre.

This is the only way to pick up my bike and even then it takes a hefty grunt. However, I am glad that videos like this exist otherwise she may still be laying horizontal napping.
Although I wasn't alive in 1967 when Charlie the Lonesome Cougar was released, thanks to The Wonderful World of Disney on television Sunday nights I do remember watching it in the 70's. I always loved those narrated Disney films.

Now this is the kind of information that never grows old. Dropping a bikle is on of life's nastier realities, but it is best done in the garage or the driveway, as opposed to a slide on the highway.

But nothing is more disconcerting than hearing the Tupperware grinding into the pavement on the way back up. I for one would appreciate a video posted here showing the right way to pick uo a bike — from its crashbars — in the driveway, from the ditch, and from the soft dirt in the rose garden, where it has pitched the rider into the thorns.

And I can't think of a more sensible moto-topic to practice one's video-making skills.

secretly I just knew you wanted to delve into video editing, otherwise why would you have PREL installed on your computer. There is an option to use a microphone and click narration on the PREL screen but I found with my laptop, it often dropped a few words at random so I resorted to a voice recorder app on my iPhone. you just need to sync it to the video. PREL has a built-in audio mixer and trimmer.

I have had to pick up my bike several times but I use the "brute" strength and "grunt" method.

I would have used the Pink Skirt method, but I didn't have my matching Pink crocs with me when I needed them

ps: can't wait to hear your authoritative voice on the soundtrack

If you were able take pictures of the "lower" at a quick enough fps, you could always create a "video" in reverse. ;)

I remember having a much harder time picking the bike up when it falls on the right side. Once you lift it back up, there isn't a side stand to hold the bike up...

I was wondering when you were going to mention Pat. Nice job stealing him away from MN :)

@Richard- If the bike's on it's right side, you can put the sidestand down before you start picking the bike up.

@Chris- If you ever come to Oregon, bring some mosquitoes. Pat says he misses them. Or something like that.

Dangit, I missed this posting...

I figured this involved the "teaching how to pick up a motorcycle"...no way a real rider like yourself would willfully just leave a motorcycle helpless on its side.