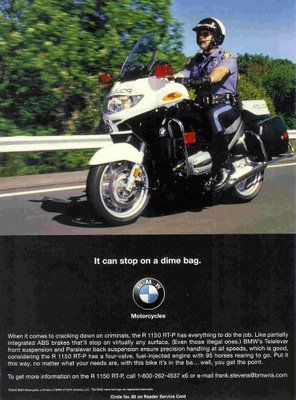 I'm sitting in traffic right behind a flatbed truck. There's no cargo on the trailer. From my vantage point the rear of the trailer is huge. The empty expanse of wood and chrome seems to stretch before me clear to the horizon. I wish I had a camera mounted to my helmet that would take snapshots of what my eyes are beholding. It would make for some interesting perspectives. Eventually the flat plane ahead of me ends at an ugly brown cab. I can see the driver through the window in the back. There is no sleeper on this truck.

I've had plenty of time to absorb the details of the truck. It's been three light changes and we're still sitting. We're at the confluence of two small roads that carry vehicles in lines like ant trails. It's the state's Capital at 9 AM. The truck and I are facing North at a stop light. Just to the East of us, blocking the road, is a train. Yellow and black markings on the locomotive have seen better days. If the engineer would just use the "reverse" function for a few seconds we could clear the bottleneck. It's not to be, now or anytime soon, it appears. Mr. Flatbed truck driver needs to turn right but cars are filling the small space leading up to the parked train. Looks like Sophie and I, plus all the drivers behind us are just going to have to sit and enjoy the morning for a while. By law, the trains can't block a road for more than fifteen minutes. I think the train people flaunt the law on a pretty regular basis.

Off to my left I see an equally long line waiting to go if ever the train leaves. There's no hope of passing to the left of the truck. Many drivers decide to turn right and head South on the street I'm facing North on. Which means they're coming in a steady stream towards me. Some of the traffic facing us at the light is able to proceed, as well. Might as well just settle in. At least it's not raining. Clouds are supposed to burn off later in the day but for now it's just sort of grey. So I shut off the motor, put the sidestand down, and wait. It's been a great three quarter hour ride from home so far. I could cool my tires a while.

Suddenly, there's some movement from the truck. In getting ready to turn right, the truck has moved far left. The cab is pointed to the right. Now I see the truck move forward and the cab come into a straight line with the trailer. The driver looks back at me and motions me around to the right. There's a bike lane on the side of the street. Not being one to turn my back on good fortune, I wave back, fire the engine, and straddle walk up beside the truck. Our light is green so I pause, then head off when it's clear. Happy ending, right?

In my mirrors I see a police bike coming rapidly up the bike lane I had just used to go around the truck. The street I'm on curves left to another stoplight. I'm just rounding the bend when I see the lights of the bike come on in back of me a ways. At the same time I hear the siren start its Banshee wail. Thinking the cop's responding "code" to a call, I don't worry. I guess I should have.

Waiting at the light to make a right turn, I see the cop on the BMW stop behind me. He finally kills the siren but the lights are still flashing their red/blue tango. I turn the corner and pull into the bike lane with the cop behind me. First thing out of the cop's mouth is:

"Two things. One, the bike lane isn't a passing lane. Two, you passed a vehicle on the right that was turning right. Both are really bad and the kinds of things that get motorcyclists hurt and killed!"

Now, I'm wearing my vest from our motorcycle safety program. I have full gear. Obviously, this guy didn't see the whole sequence of events. On top of that, I'm thinking the siren and the bristling posture are over the top. The needle on my Attitude Indicator Dial takes a decided swing toward Negative with a touch of Combative.

I know, I know. Sometimes you just have to keep your mouth shut and take certain things. A stint in the Military and some years in law enforcement ( which is quasi-military ) has taught me that pretty well. As far as I'm concerned, though, this cop's my peer. I've been there, done that, and got the t-shirt. Literally. The only difference is that I no longer have the power of arrest. He's talking to a guy who spends almost every weekend between the first of February and the the end of November teaching rider safety. Not to mention that I'm certified to teach riding and street skills to MOTOR COPS! I'm sorry, but I really resent his approach.

"So what you're telling me is that you did the very same thing I did, although a lot more quickly, to come pull me over?", I fire off.

"I had lights", he says. I reply; "I watched you in the mirror and the lights didn't illuminate until AFTER you went through the intersection. The truck driver knew I was there and made room for me." I know I wasn't helping my cause any. I just prefer to be wounded while fighting as opposed to remaining unharmed by cowering. They say discretion is the better part of valor. Try telling that to my cowboy blood.

The officer didn't reply to me. He just asked me if I had my driver's license with me. I told him I would have to reach deep into a back pocket for it. "Don't get all nervous on me while I go for it", I say. I figure anytime a cop pulls someone over with a siren a lot of nerve endings have to be tingling. At this point I hadn't removed my helmet, my gloves, or my black Ray-Ban sunglasses. I'd worn them because I knew the sun would come out at any time and didn't want to have to pull over just to put them on. I dismounted the bike, pulled my gloves off and fished for my wallet. At some point the cop finally softened. Barely. He asked if the bike was registered to me. I told him yes, and I had the registration handy. He said he wouldn't need it. Officer Uptight asked me who my insurance company was. I told him who it was and said I had the card handy, too. He said he didn't need it. By the way, he already had the ticket book in his hand.

I ended up with a ticket for "Unsafe Passing on the Right". I guess ticketing is the best revenge. Bail is $242.00. The cop spent a lot of time telling me how busy the court is and how I could save all the trouble by just sending in a check and a letter. He knows it's shaky. I'm going to show up and plead "Not Guilty". The only thing I was guilty of was straddle walking up the bike path. The judge may or may not agree with me. I'm going to tell how "filtering" works so well in other places and it ought to be legal in Oregon, as well. We'll see. I hope the cop has to come to court on his day off.

The rest of the day was more fun. I played with a small scooter for a while while Sophie was being tended to in the shop. That was the reason for the trip in the first place. I'll tell you about that in the next post.

That's an expensive lesson Dan. I'm just not sure what the lesson is for you, the cop, or me.

If the trucker waved you around that would seem enough for the cop to let you go....

The few times I have been stopped, all in cages, I have smiled and remained silent and listened. The closest I got to a ticket (I think) is when I splashed a State Trooper with our company van while he was pulling a bale of hay from the roadway. I think he was pissed. The van was on cruise control so I know I wasn't speeding. When he caught up to us (my work mates sitting in the back laughing) I could see he was soaked. He asked me where I was going in such a hurry and I responded. "I am going to a church to make photographs of a 4H meeting. I'm not in a hurry sir, that's why I had the cruise control set to 55 MPH." He lectured me a while about the dangers of hydroplaning and such. In the back my colleagues are chuckling and making comments about why he is so wet and I am just hoping he doesn't hear. Finally he just says "Be careful" and walks back to the cruiser and I am on my way.

My lesson has always been to remain silent when stopped and only answer when asked. I wish I could extend that to encounters beyond just with the police.

Steve,
The money isn't paid yet! I'm not sure there is a lesson, either. There are just too many variables in these type of dynamic situations. Part of a traffic stop is affected by who the cop just talked to last, too. I guess I have a different perspective having been on the other side of the badge.

Funny story about giving the trooper a bath!