I saw this in the November issue of Motorcycle Consumer News. I thought it would be of interest to motorcycle commuters. This is a quote from the magazine.

Only 23% of the respondents thought car drivers would speed on their way to work but 57% thought motorcyclists would do so. Motorcyclists surveyed, however, were pretty much evenly divided: 35% thought drivers sped more, 33% thought riders did, and 30% thought both groups sped equally. Motorcyclists were better judges of who is doing what on the roads: According to government data, about 25% of motorcyclists go 5 mph or more over the speed limit, while 20% of car drivers do the same."

I think this speaks well of the riders in the U.K. If only the riders here were as tuned in. A lot are but most don't seem to be. One of the challenges facing motorcycle commuters is taking care of ourselves in traffic. Getting good information is vital but isn't as easy as just looking around. Even what our brains tell us our eyes saw can be sort of a lie. That's where the difference between "seeing" and "observing" comes in.

Surrounded by their steel cages, car drivers often avoid dire consequences for bad decisions. Oh sure, the vehicle suffers some damage and the drivers involved face the aggrevation of paperwork, car repairs, etc. It's just not often that accidents in commuter traffic result in serious injury or death to motorists. Nothing can be written in stone, granted. This just seems to be what I've observed. Most of these bad decisions are based on inaccurate information.

A person's eyes will "see" something. The picture the brain receives can be quite a different image. We all have preconceived notions and prejudices. The brain uses these things to interpret the information coming from the eyes. Here's a common example of how we can look at a picture and see a couple of different things depending on what we're looking for. 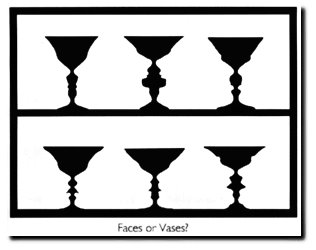 If you're a "people" person you may have seen the faces right away. If you're a collector of antiques you may have seen the vases first. The point is that our brains will sort information based on its own set of criteria. Past experiences, the influence of the media, things we've been thinking about recently, as well as many other factors will bias what our brains tell us. The trick is to use our powers of observation to discern what's really there. Good decisions require accurate information. It's so critical for riders to have good judgement; consistently making those good decisions. Bad decisions on a bike can easily be disastrous.

Coming back to the report on the riders in the U.K. shows us that they must be getting fairly accurate information. That is, they're seeing what's really happening. The car drivers are jumping to conclusions based on the actions of a few motorcyclists. Their brains are interpreting reality based on too small of a sample. Or it could be that they're watching too much cheezey TV!

Here's some final tidbits for thought. How much of this power of observation do riders bring with them? How much is developed from the frequent riding while commuting? Don't we talk about how being on a bike helps us to tune into our world so much more? Is there something about the heightened awareness of imminent risk that also speeds up our skill building process? On the other hand, maybe it's not as noble and elevated as we'd like to think. Are we really just a snapshot of the larger world? A world where the fit survive? A world where those without good survival skills drop out of the gene pool, if you know what I'm saying? That can't be true, I think, because there are still so many stupid car drivers. Who knows what to think? I'm just a Warrior and sometimes Scribe. I'd scratch my head but my helmet's in the way!

P.S. A couple of things crossed my awareness as I was writing this post. They're worth passing along.

The Oregon State Police just announced that in the first 6 months of 2006 there were 258 citations issued for speeders doing 100 mph or faster. This is a 19% increase over the same time period of 2005. Already troopers have cited more motorists for travelling 116 mph than in all of 2005. One of the areas with the most tickets written is a stretch I travel. I wrote about it earlier. This is the stretch where the construction has created the Canyon of Doom. My 180 mile freeway trip is getting more dangerous all the time!

A study was recently concluded in Oregon of motorcycle fatalities. This study was done by reputable researchers. 88% of the fatalities were deemed to be the fault of the rider. That's an extremely sobering statistic! Maybe that helps explain why I spend an average of 36 weekends a year involved in rider training. Hopefully I can help make a difference in bringing this percentage down.
Posted by irondad at 5:52 PM

I sense myself a great difference in my default observational skills when riding or driving. When I am on the scooter I seem to automatically focus on the road and other vehicles. I feel part of the flow and am sensitive to the constantly changing transportation enviroment. That's the default mode.

When I get in my truck I instantly feel disconnected from the road. I have to work at being part of it in the same way I am on the Vespa. I feel a barrier and distance from the road I am trying to pay attention to. Add the radio to that and I have to believe my perception is less sharp while driving. And I am trying to pay attention. When I think about those people attending a phone, a BlackBerry, a kid, a burger and it can be pretty scary.

There was one bit of good news in your post:
"88% of the fatalities were deemed to be the fault of the rider."

That statistic tells me I do have the opportunity to manage my risk through the actions and decisions I make.