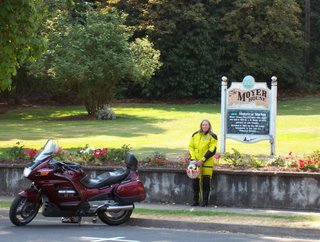 Skating out of painting.

There's another class going on this weekend. We have some new instructors who are still trying to get signed off from apprenticeship. Time's running out so I've been making myself available for training. As of Saturday it has been 26 days without a day off. I have next weekend off. By the time Friday night rolls around I'll have 32 days straight.

I actually have to take next weekend off. Not that I won't be glad for the rest. It's just that next Sunday will be will be our 29th anniversary. Don't know how she's put up with this bike nut for so long. I think it's the old "ladies love outlaws" thing. Hey, I even have a black cowboy hat. When I have the beard and I'm wearing the hat with sunglasses Katie says I look like Hank Williams Jr. I'm not sure if that's a compliment or an insult. A lot of people do stare my way for a while, I have to admit.

Katie's got this inspiration to paint the other two bedrooms in our house. There's some wall patching required due to the normal wear of raising boys. Time fades paint but you never really notice because it happens gradually. It just crossed my mind that our riding suffers the same fate. Think of it. We age gradually. Our reactions, physical strength, eyesight, and any other thing you can think of fades. It just does it so slowly that we never really see it. The day to day change is small. Looking at the picture on a year to year basis would probably scare us. We just need to be aware that it's happening and adjust accordingly. Our rider clinics are like a fresh coat of paint. I firmly believe that all riders should find a way to clean out the cobwebs and spruce up the skills on a semi-frequent basis.

Anyway, the plan was for me to come home Saturday and help paint. I got home about 2:30 PM. To tell you the truth, the last thing I wanted to do on a sunny afternoon was be inside sucking up paint fumes. There's not many of these nice days left, after all. I had to find a way to persuade Katie we should go ride. I've tried using the "puppydog eyes" thing. It just doesn't work for me. Picture a Doberman trying to look sweet. Ain't meant to be, folks. Another approach would be needed.

So I pulled the old "I'm feeling so guilty because I've been neglecting you, lately. All we've done is work. Let me take you to dinner. On the way we can enjoy the sun by taking a ride. Those bedroom walls will always be there but these nice afternoons are going to start becoming scarce."

Say what you will, it worked for me. We had a great time meandering back roads. It was time for a pit stop and so we took care of that in Brownsville. This little town still has the feel of it's history permeating the air. The Moyer house is a museum dedicated to one of the early inhabitants. 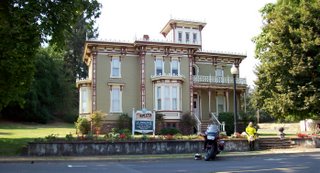 I know, I've got to work on the photos. I get in too much of a hurry. Like a lot of things, I shoot from the hip. If I had the patience of Steve things would turn out better. I guess I'm still a soldier at heart. Gun and run.

Anyway, here's the house. John Moyer came to Brownsville in 1852. He and a friend were in their early twenties. Both got jobs building houses. John started a sawmill. Timber was plentiful and folks were coming out and needed buildings. In 1888, after realizing quite a bit of financial success, John built this elaborate house. Italian marble graced the floors. All the wood was sawn at his mill. The windows had venetian type blinds with each slat being formed individually by John. It was quite a showpiece in it's day. Still is, actually. It just took on some different forms over the years. Towards the last of its private ownership it was actually being used as apartments. The Brownsville Historical Society and Linn County procured it for $7500.00 and restoration began.

John Moyer most likely never rode a bike. His spirit, however, would probably move him to be a rider if he were around today. You have to admire the men and women who came out West with very little to call their own. It would have been easy to stay with the crowds back East. Some had no choice in the matter, but most wanted to blaze their own trail. A lot like us motorcycle commuters, isn't it?

We ended up having a nice supper and a great ride. Most of all, I got out of painting!

Miles and smiles,
Dan
Posted by irondad at 4:46 PM